Yui Rio, whose real name is Yui Horio, is one of the female students who attended Akademi in 1980s Mode.

Before she was reintroduced in 1980s Mode, she was one of the female students who attended Akademi in 202X Mode. She appeared in Buraza Town as a background character, along with the other removed students. However, she has finally been relocated to 1980s Mode.

Yui wears the default 1980s uniform and wears red knee-high stockings instead of the traditional black.

She has red, shoulder-length hair that's tied into a short side ponytail on her right side. Her bangs are tied back on her right side, but they hang freely on her left, partially covering her left eye. Her eyes are scarlet as well.

Yui wore the default uniform unless customized by the player.

As of the February 8th, 2016 Build, she had crimson hair kept up in a short ponytail on the right with her bangs swept to her left in mini triangle shapes. Her eyes were scarlet.

As of the January 16th, 2017 Build, she wore a red friendship bracelet on her right wrist.

As of the February 2nd, 2017 Build, Yui wore red stockings and panties.

"A brutally honest girl with a sharp tongue. A little mischievous, and known to pull pranks. May be hiding a cruel and sadistic side."

Among the personas that are currently implemented in the game, Yui is a Loner. If she sees a corpse or witnesses a murder, she will run away from the school and call the police. She cannot participate in physical fights against murderers.

Yui had the Spiteful persona. If she saw a corpse or witnessed the murder of a student who was being bullied, or a student who was bullying her, she would wink and smile, complimenting Ayano Aishi on her crime. However, she'd then run off in order to not be considered an accomplice. She would not talk to Ayano the next day after seeing her commit murder, but she wouldn't tell anyone else about what she did. If she witnessed the murder or corpse of any other student, she would leave the school and call the police. If the player had their phone aimed at her, she would become annoyed and cover her face. She couldn't participate in physical fights against murderers.

It is possible that she didn't care for the boundaries of others, as the reference picture[2] of Yui is shown trying to grab Yuna Hina's rear. Druelbozo has explained that Yui is "Gettin' that booty".[3] As well, she was shown stealing Mei Mio's glasses in a second reference image.[4]YandereDev imagines that she didn't often openly express how she felt on the inside. Only a violent, bloody incident like a murder or a corpse caused her true nature to show for a moment. She chose to hang out with the popular crowd and join a club because she sees it as a form of "protection."[5]

Yui changes her shoes at 7:00 AM, then hangs out in the school plaza with the rest of the rainbow girls and Kaguya Wakaizumi. She goes to class in Classroom 2-2.

At 1:00 PM, she then heads to the rooftop, along with the rest of the rainbow students and Kaguya, to eat lunch. She heads back to class at 1:25 PM, then participates in Cleaning Time at 3:30 PM, cleaning Classroom 2-2.

At 4:00 PM, she lastly heads to her locker, changes her shoes, and walks out of school with the rest of the rainbow students.

During Week 3 and Week 7, Yui sits in the library and reads a book so that there will be witnesses around Honami Hodoshima. (And later Teiko Nabatasai).

Yui changes her shoes at 7:00 AM, then goes straight to the library and reads along with the other rainbow girls. At 8:00 AM, she then goes to class in Classroom 2-2.

At 1:00 PM, she heads to the rooftop, along with the rest of the rainbow students and Kaguya, to eat lunch. Yui heads back to class at 1:25 PM, then participates in Cleaning Time at 3:30 PM, cleaning Classroom 2-2.

During Week 8, Yui talks with Komako Funakoshi in the plaza, most likely because she wants to be more like her.

At 7:00 AM, Yui enters the school grounds and immediately investigates various students, including Ryoba.

At 8:00 AM, she walks to Classroom 2-2 and sits at her desk. She starts her morning classes at 8:30 AM and leaves to once again investigate various students at 1:00 PM.

At 7:05 AM, Yui entered the school grounds with the other female students. She walked to her locker at 7:10 AM and changed from her outdoor shoes to her indoor shoes. At 7:15 AM, she walked into the plaza, to the left side of the fountain, and gossiped with Yuna Hina, Koharu Hinata, Mei Mio, Saki Miyu, and Kokona Haruka. Musume Ronshaku would gossip with them before the bullies were implemented.

At 8:00 AM, Yui walked into Classroom 1-1 and sits at her desk. She started her morning classes at 8:30 AM, and left to go to the cafeteria to gossip with the Social Butterflies at 1:00 PM.

The topics towards Yui are (Negative/Positive/Neutral) as follows:

Yui walking in the background of "Raising the Strength Stat".

Yui walking to her locker from The Gaming Club.

An illustration of Yui with the rainbow shown in Mid-January Progress Report.

An illustration of Yui from the the third anniversary blogpost. 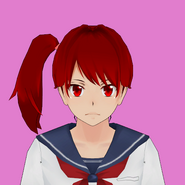 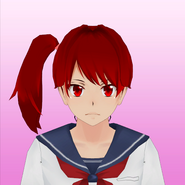 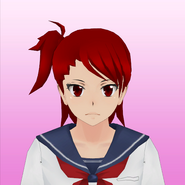 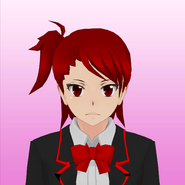 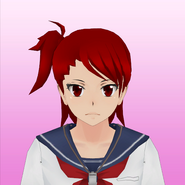 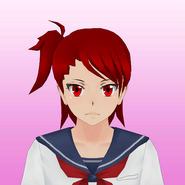 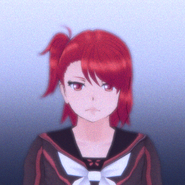 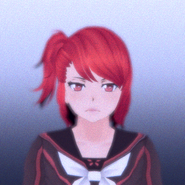 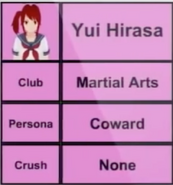 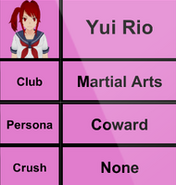 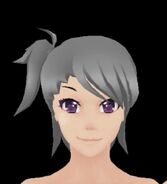 One of the models that Druelbozo has made using Yui's hair.

A full body reference of Yui with the rainbow six.

Another reference of Yui with Mei Mio. 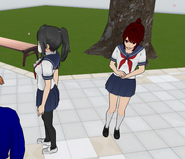 Yui and her friends gossiping 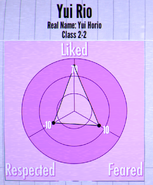