When Yandere Vision is activated, everything becomes hazy and time slows down. Ayano's eyes glow red and a black outline surrounds her body.

Yandere Vision can be activated by holding down Left Control (PC) or RB (controller).

Yandere Vision allows the player to see characters and objects of interest through walls. Ayano can see Senpai, rivals, and useful items. To see certain NPCs through walls, the player must "tag" them.

The player can "tag" a person by taking a clear picture of their face and sending it to Info-chan, who will then give Ayano information about that particular person. Info-chan will not recognize NPCs without a proper AI. The player can tag specific students by going into the student profile menu, they will then appear with a red circle around them in Yandere Vision.

When Yandere Vision is active, outlines indicating objects or people will appear. Different things have differently colored outlines. Outlines around people can change color, depending on the circumstances.

Yandere Actions are different actions Ayano can perform while using Yandere Vision. The player can press one out of three currently available button prompts at the bottom of the screen.

Ayano will stare at a picture of Senpai, and will be incredibly entranced, causing her to not pay attention to the time. The illusion of time passing faster to Ayano becomes a reality for the player. This feature is activated by pressing E and is only available after the player has taken a clear picture of Senpai.

Pressing R will cause Ayano to fake a reaction, just like how a student reacts to murder or a corpse. Ayano can perform this animation anytime she wants, but it will be considered suspicious behavior unless she's in the presence of a corpse or a murder-suicide. As of now, just for role-playing at the moment, but it might be given more importance in the future.

It is unknown what will this remaining button will do as their are no current functionality of this button.

A Teacher's Pet who witnessed a murder and alerted a teacher. June 3rd, 2016. 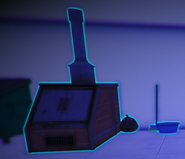 A cyan outline around some helpful items. June 3rd, 2016.

The dumpster and the bags inside have no outline, but the bag outside does. June 3rd, 2016. 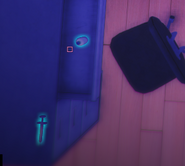 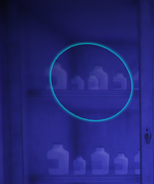 Green outline of a student whose picture was sent to Info-chan. June 3rd, 2016.