Witch Mode is an Easter Egg Mode in Yandere Simulator.

Witch Mode is a reference to both DIO (an antagonist of the 'Jojo's Bizarre Adventure' series) and Bayonetta (the protagonist of the Bayonetta series). To activate this mode, one has to press W in the Easter Egg menu. It can't be deactivated unless the game was reset or the day ended. When this mode is activated, Ayano has grey eyes with a slight green tint and a white bob. In earlier builds, before the mode had gameplay, Ayano would retain her ponytail. She wears a black bodysuit with an open back showing a tattoo and a revealing front, showing her cleavage. She has red lipstick and red eyeshadow.

Pressing Left Control causes Ayano to activate Witch Time, which freezes everything in-game except for herself. When the player presses F while in Witch Time, Ayano will spawn knives which will move once Witch Time is deactivated by pressing Left Control again. This will cause NPCs in the knives' range to be killed. In previous builds, this mode was only cosmetic, it had no effect on gameplay.

Summoning knives
Add a photo to this gallery 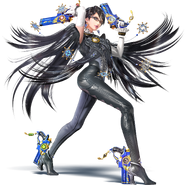 Suit Bug.
Add a photo to this gallery
Retrieved from "https://yandere-simulator.fandom.com/wiki/Witch_Mode?oldid=500316"
Community content is available under CC-BY-SA unless otherwise noted.