View source
watch 02:59
Metroid Dread - The Loop
Do you like this video?
Play Sound

The Vending Machines are machines where Ayano Aishi can buy drinks or chips.

On the May 24th, 2015 Build, there was a un-implemented plaza filled with several miscellaneous placeholder objects. A red unusable vending machine was one of them, and it was located on the right side. It was eventually removed in the next update.

The first usable vending machine had a picture of leaves in the middle, and writing in hot pink kanji. The drinks that came out were blue and white cylinders with light blue writing on them. It was located on the right wall of Akademi High School.

As of the November 15th, 2015 Build, there are two identical vending machines on campus. They are located on the second floor in the cafeteria. When it is lunchtime, students will stand by the machines and gossip, but they will not interact with the machines.

As of the March 2nd, 2016 Build, there is a trash can located between the two vending machines.

As of the December 2nd, 2018 Build, the Vending Machines have been redesigned. The vending machines in the Cafeteria are E-Sven Up And Orange Soda. The eating area also features three Vending Machines which are Pretsy, Cola Dora and Mr. Peter.

When Ayano walks up to a vending machine, a button prompt appears that says Buy Drink. When the E key is pressed, (A for the controller) a soda can will come out the bottom flap, as long as the player has enough Money. The more cans that are bought, the lower frame rate will fall. At the moment, Ayano can pick up drinks, but they serve no purpose apart from completing Hazu Kashibuchi's task, where he is thirsty and all you have to do is buy a drink and give it to him.

Ayano can sabotage one of the drink machines through the use of a screwdriver. This causes the machine to take in money but not dispense any drinks. This is used to expel Osana on Thursday, where you report her for vandalism. After sabotaging the orange vending machine (indoors), you buy a salty snack and give it to Osana. She does not accept salty snacks except on Thursday. When she goes to the vending machine and kicks it, you take a picture of her kicking the machine and then report her to the Guidance Counselor.

If Ayano buys a pack of Salty Snacks from its respective machine, she can give the bag to a student (Except Student Council, the Delinquents, Kenko Sukoyaka, and Osana Najimi(except Thursday)). They will briefly eat and proceed to take a drink from the nearest Drinking Fountain to quench their thirst. If Ayano has met certain criteria (sabotaging the fountain with a Pipe Wrench, plugging in a Power Strip to the nearby power outlet, exposing the wires of the nearby switch with a Screwdriver, and turning on the switch), any student that drinks out of the fountain will get electrocuted. Ayano herself can get electrocuted if she stands too close to the sabotaged drinking fountain. If Osana receives a snack on Thursday(only), she will head to a vending machine instead of a drinking fountain to quench their thirst, so to accommodate for the Expelled elimination method. 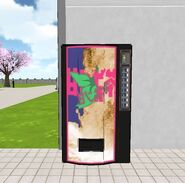 The vending machine in the October 8th, 2015 Build.

Two vending machines located on the second floor of the school building.