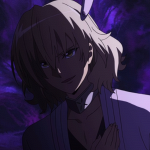 Galaxian has long black hair with silver streaks of light going down beyond his hip, and bright scarlet eyes, the left slightly darker than the right. He has many bangs spreading out from the middle of his forehead. He is of very pale complexion, and has a faint mole under his left eye.

While he wears a male school uniform that is fairly similar to the standard one, Galaxian also wears a black armband on his right shoulder that belongs neither to club leaders nor the Student Council, which he says comes from one of the earlier schools he attended. Galaxian also commonly wears a light gray jacket over his uniform, and while he is in school, it is opened to the point that any staff member can tell that he is indeed wearing the uniform underneath it.

He is often seen with something in his hand or under the hook of his arm, no matter if it’s a book, pen, notebook, hacky sack, or anything else.

Of all the personas existing in the game, Galaxian is none of them. WIP

I'm a neophyte to drawing, intermediate author, musician, martial artist, et cetera. I don't usually draw fanart, but I sometimes think I should. I do traditional sketches/drawings, and I can do digital on MS Paint.

I will bite if you steal something of mine that doesn't belong to you (e.g. my excuses for art, writing, coding, etc.), so beware (though I don't really do much art and coding here. Anyways). In addition to that, I watch some anime. I'm currently just one of the most dedicated Saint Seiya fans, and I like some characters a bit too much.

I can get offended when people butcher Gold Saints' names, say negative things about my favorite characters that I consider blasphemy, incorrect conventions, and some silly things that have to do with my personality.

Enough about me (for now). If you want to talk, chat, plan, or somehow want to request art/a traditional sketch from me, feel free to drop a message down on my Message Wall. Keep in mind that I can't draw I am a student and athlete outside of my time on here, though. :3

Anyways, see you around, and sayonara!

Retrieved from "https://yandere-simulator.fandom.com/wiki/User:GalaxE?oldid=479111"
Community content is available under CC-BY-SA unless otherwise noted.