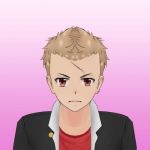 Gaku Hikitsuri is one of the male students that currently attends Akademi High School.

Gaku wears the default male school uniform with the jacket open revealing a red shirt with a Phoenix on it. He wears a large, thin box on his back, with a crowbar in it. He also wears two lobe ear piercings on his left ear.

He has short, spiky, dark blond hair, and brown-red eyes. He has a scar that is in the middle-left of his forehead.

Prior to becoming a delinquent, he wore the default male uniform and had short, blue hair.

He projects a 'fearsome' appearance so that he will not be bullied again.[1]

Among the personas currently in the game, Gaku is Violent. If he sees Ayano carrying a corpse or murdering someone, he will run up to her and begin a combat mini-game and will not stop attacking her until the player fails a button prompt, or until Ayano kills him.

If Ayano initiates a fight with him, he will fight until either one of them are injured, if he loses, he will drop his weapon.

If he sees Ayano bloody or insane he will not lower her reputation.

At 7:20 AM, Gaku enters the school grounds. He walks to his locker at 7:30 AM and changes from his outdoor shoes to his indoor shoes. At 7:40 AM, he walks to the incinerator, and talks with Hokuto Furukizu, Dairoku Surikizu, Hayanari Tsumeato, and Umeji Kizuguchi.

Originally, Gaku was being bullied to the point considering a suicide pact with his four friends after the bullying reached its peak. However, after he and his friends witnessed Osoro Shidesu beat up multiple students from another school, he realized the importance of a tough facade, joined with her, and changed his appearance and attitude to fit that of a delinquent.[1]

The topics towards Gaku is Negative/Neutral/Positive follows:

Retrieved from "https://yandere-simulator.fandom.com/wiki/User:GakuHikitsuri?oldid=436394"
Community content is available under CC-BY-SA unless otherwise noted.