Torture is a difficult way to eliminate a rival in Yandere Simulator.

To be able to torture a student, Ayano Aishi must first go through the process of kidnapping them and bringing them into her basement. They will be tied to a chair and not able to move; they can only look at her and speak. When Ayano walks up to the student and presses E on the keyboard (or A on the player's controller), the player will be taken to a torture screen. The player is able to choose how long Ayano will torture them. The victim's sanity is displayed at the top of the screen. Different lengths of torture will reduce their sanity by different increments. Once the player selects the duration, Ayano will loom over her victim as they scream in terror. Also, we can make a student be bullied and make a bully talk with the target and take a picture of them, then you should meet the student by putting notes in their locker and show the photo, however this method is only available for Horuda Puresu.

In older builds, Ayano could torture the student as soon as they were kidnapped, but after the December 1st, 2015 Build, she goes straight to sleep after she sneaks the victim home.

This option is only available in the morning. This option allows Ayano to torture the victim for one hour and decrease the victim's sanity by 2.5%. She will arrive at school one hour late.

This option is only available at night. This option allows Ayano to torture the victim for four hours and decrease the victim's sanity by 10%. After she finishes torturing her prisoner, she will immediately go to sleep until the next day.

This option is only available in the morning. This option allows Ayano to torture the victim for twelve hours and decrease the victim's sanity by 30%. She will skip the school day entirely, and will stop when nighttime arrives. This is for when the player wants to torture someone, but still wants to do nighttime activities like play video games, read manga, or gossip on the Internet. Her reputation will decrease by twenty points the next day. The player cannot choose this option on Friday.

This option is only available in the morning. This option allows Ayano to torture the victim for eighteen hours and reduce the victim's sanity by 45%. She will skip the school day entirely, and nighttime activities as well. Ayano will go to sleep immediately when the torture stops. Her reputation will decrease by twenty points the next day. The player cannot torture a student for eighteen hours on Friday even if the rival is eliminated.

This option will only appear when the student has reached 0% sanity. They will obey Ayano's every command and will remain motionless sitting behind a bush to the side of the school gate, muttering mindlessly until Ayano gives them a weapon. A menu will appear allowing the player to choose which student they want killed, then the mindslave will slowly stand up and clumsily walk to the chosen student, push them onto the ground and stab them multiple times, killing them. After that, the mind-slave will stab themselves in the neck, causing a geyser of blood to spurt out. When the sequence ends, the mind-slave will collapse to the ground, dead. At this point, Ayano's chosen student and mindslave have been eliminated, without needing to dispose of a murder weapon or get a single drop of blood on her. When the police come, they will investigate it and then be unable to arrest a mindslave because she was killed before the police arrives. Afterward, they will believe that they know about the identify of the killer, but they are unable to find any further conclusions, and leave the school. The school atmosphere wil not decrease since the killer is dead. If the police arrive during the brief period between the mindslave killing her target and committing suicide, they will arrest the mindslave. Either way, you'll get rid of two people in one shot. You must have a picture of the target to command the mindslave to kill the chosen target.

As of the March 5th, 2016 Build, the player cannot give a slave any large, non-concealable weapons, such as a katana.

In the future, teachers will have different dialogue if they see a murder-suicide.[1] Students will stare at the mind-slave and wonder, but will not take any action.[2] 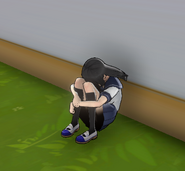 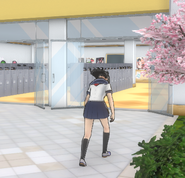 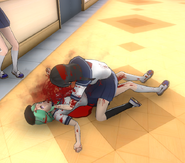 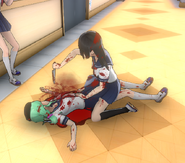 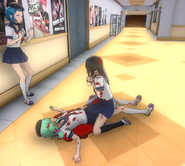 The police believe that they know about the killer, but they are unable to take any further conclusions.

If the chosen student dies before the slave can reach them, or if the day ends without the slave being used for anything, she will just commit suicide.

After each torture session, the student's sanity will decrease. At high sanity the student will keep looking at the player, asking why they were kidnapped. The lower it is, the more they will twitch and mutter. In the beginnings of the torture, they will fight for their life, but when their sanity is lower, they will begin to accept their fate.

When they have no sanity left, the victim's eyes become a dull grey, and they stop twitching and watching Ayano. Ayano can then bring them to school and ask them to kill her rival, or keep the victim locked up in her basement. They will mutter to themselves on loop when brought to school.

It may be possible that torturing one student might lower another kidnapped person's sanity.[3]

Currently you can only kidnap one female student at once, but in the future you may be able to keep up to five kidnapped students at once. There might also be a supermarket implemented in the town so you have to buy food to feed the students.

Text saying the option is unavailable.

Text saying that the victim cannot be brought to school yet. 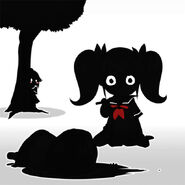