The teachers are mostly minor characters in Yandere Simulator. They help enforce the school rules of Akademi.

"After an incident in 1989, the Japanese public began to associate Akademi Academy with the thought of murder, and enrollment rates dropped sharply.

In order to restore the school's reputation as a safe place for higher learning, the Headmaster mandated that all faculty members take courses in self-defense.

As a result, every staff member at Akademi - from the teachers to the nurses to the guidance counselor - is capable of defending themself against a direct assault from an armed attacker."[1] 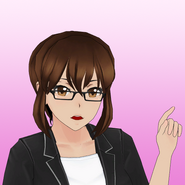 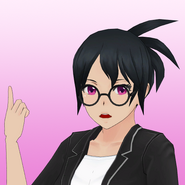 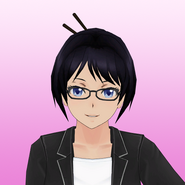 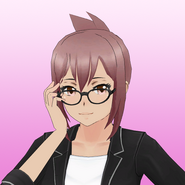 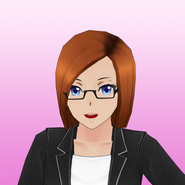 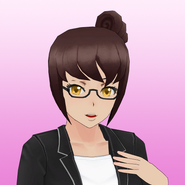 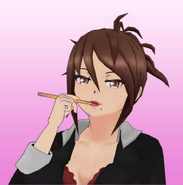 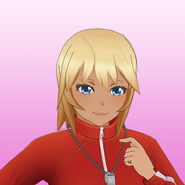 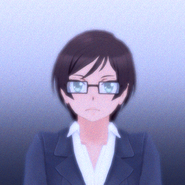 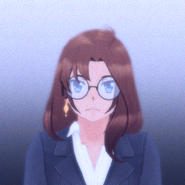 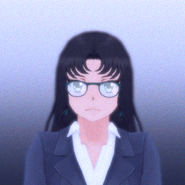 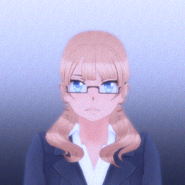 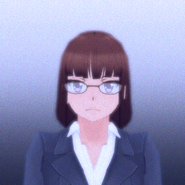 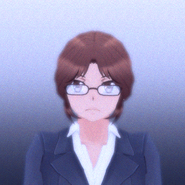 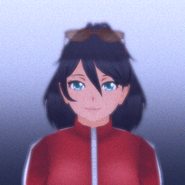 Currently, all the class teachers have different bust sizes. Every teacher wears a white shirt, a black blazer, black leggings, and black high heels ornamented with blue bows. And instead Mida Rana as a breast at 2. She is dressed in a brown cardigan where the bra is also seen. the red skirt, the brown stockings and finally the black heels.

Previously, all the teachers had a brown ponytail identical to Ayano's. Their eyes were the same color as their hair, and they didn't have glasses.

Later on, the teachers had a unique hairstyle; their hair was in a bun with different shades of brown varying from teacher to teacher. They wore black framed glasses and their eyes were the same shade of brown.

There's a Gym Teacher named Kyoshi Tachikawa. She stands near the school entrance, before and after school. She will patrol the Faculty Room during class time and lunchtime.

Currently, all of the teachers have their own individual hairstyles. Reina's hairstyle, however, has not changed since she was introduced.

After a teacher has seen a corpse, her pupils will shrink, similar to "mentally scared" students.

There will be at least one teacher that will be a stereotypical anime teacher with a tight skirt, high heels, and lipstick. It's been YandereDev's vision to have this type of teacher since the very beginning.[2]

When a teacher is killed, she will be replaced the next day by randomly generated teacher with a random hairstyle, hair color, bust size, name, and surname, but with the same stats, clothes, and accessories of the dead teacher.

Every teacher's persona will be set to Strict, likely with no exceptions.[3] Teachers will refer to Ayano by her surname or full name.[4]

If Ayano is late for a class, her teacher will scold her. The intensity of the scolding depends on how late she was. The player will also get fewer study points to use for that class period.

They are one of the few characters that Ayano cannot normally interact with or kill, unlike the regular students.

The same thing happens when there is a poisoned student, although a student with any persona can report to a teacher. In the future, students might report to the nurse instead when someone is severely ill or badly injured.[5]

However, if the body is quickly moved out of sight before the teacher gets there, she will conclude that it was just a prank, scold the student for wasting her time and leave. At this point, that student will be mentally scarred.

Ayano can ask a student to distract a teacher for a couple of seconds. She can then kill any students in that classroom without the teacher's interference. She can also gossip about a teacher to a student to damage their reputation; however, Ayano will refer to her as a student.

Teachers will call the police at the end of the day if they find a pool of blood or a bloody weapon on school grounds. They will also call the police if Ayano tries to attend class and hasn't cleaned up the evidence.

Teachers are able to pick up dangerous weapons lying on the ground and place them inside a storage box within the faculty room. [6] They will eventually investigate death screams as well.[7]

Previously, teachers would automatically expel Ayano when she looks suspicious. This will lead to the "Expelled" Game Over. If the player is in the Occult Club, it will take longer for teachers to notice Ayano's unruly behavior. Now, if a faculty member sees Ayano bloody, stealing, etc. she will be sent to the Guidance Counselor.

The illustration of one of the teachers from "I Want My Senpai Back".

Illustration of Rino Fukahori in "Bucket-Based Murder in Yandere Simulator".

A gif of a WIP teacher pinning Ayano to the ground.

Natsuki disciplining the player for carrying a weapon.

Karin disciplining the player for distracting her class. 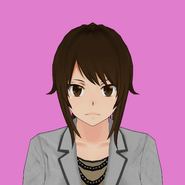 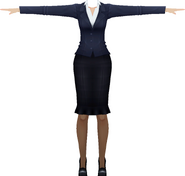 Model of the teachers's uniform in 1989.