Tatoro[1] is a turtle in Yandere Simulator.

Tatoro is a small turtle that lives in a tank in the far right area of the Light Music Club. He has a dark green shell, with a lighter shade of green on his flippers and head. There is a dark green heart spot on Tatoro's forehead. He has black eyes and no visible mouth.

As of August 15th, 2016 Build, the player has the option to pray to Tatoro to open a debug menu for testing sanity-dependent killing animations. Tatoro also has the option to "Forgive Sins", which will allow Ayano to regain full sanity, make all the blood on her disappear, and prevent Ayano from being arrested. This was added as a debug feature; in the final game, Tatoro will function as a normal turtle and will serve no purpose.[2]

Tatoro will slowly swim around in circles inside his tank. Aside from that, he has no other routine. 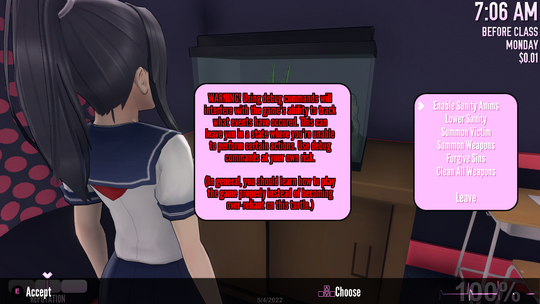 Retrieved from "https://yandere-simulator.fandom.com/wiki/Tatoro?oldid=470381"
Community content is available under CC-BY-SA unless otherwise noted.