View source
watch 02:23
Wiki Targeted (Games)
Do you like this video?
Play Sound

Tasks are a type of interaction with students that can be used to befriend said students. They have not been fully implemented yet.

When Ayano Aishi walks up to a student and prompts the interaction wheel, the player must choose the sprite art of the two people holding hands. When chosen, the student will proceed to tell the player what their task is.

As of the October 11th, 2015 Build, Ayano can accept or deny the task. Press E to accept the task and Q to refuse.

After completing the task, Ayano must walk up to the student and select the task function again. The student will thank her and a big pink "TASK COMPLETE!" sign will appear on the screen for several seconds. The player's reputation will increase by 1, and the student will become her friend and will be willing to do tasks for her. There are also other benefits that have not been released yet.[1] The same task cannot be completed again unless the game is reset. Tasks cannot be given to Ayano in the morning until after the student has put on their indoor shoes or if their task that involves specific character are absent in school.

Ayano is able to check her phone to view all the tasks available. When a task is completed, a check mark will appear next to the mission.

Eventually, every NPC will have at least one task. [2] Some will not be as easy.[3]

Hazu Kashibuchi: Hazu Kashibuchi is thirsty. It would be easy to manipulate him into feeling indebted to you by giving him a drink.

Ayano can complete this task by purchasing a soda from a Vending Machine and then giving the soda to him. 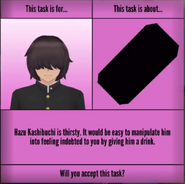 Kyuji Konagawa: Kyuji Konagawa has a crush on Osana, but doesn't know how to talk to her. Use the drops menu to purchase an item that can help him. 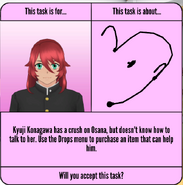 Getting the Headset from Info-chan.

Ayano can complete this task by purchasing a headset from the drop menu and giving it to him. Also, since Kyuji is the suitor of Osana, the player can matchmake Osana so that Osana will love Kyuji instead of Senpai.

This task will be unavailable if Osana Najimi was dead or went missing.

Saki Miyu: Saki Miyu has lost her bra somewhere on school grounds. Locate the bra, then return it to her.

The item can be found on the most northern part of Akademi's wall, just a couple of meters from the Confession Tree. It will not spawn unless Ayano has accepted the task. 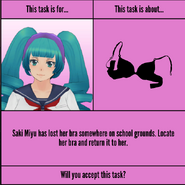 Kokona Haruka: Kokona Haruka's school uniform is too tight. Discover a way to provide her with a looser uniform.

Ayano can complete this task by going to the Sewing Room, and modifying the spare uniform which can be bought from Info-chan through the Drops menu or through the Nozama! web store. 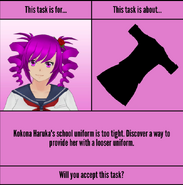 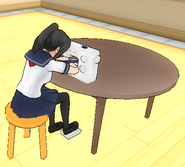 Riku Soma: Riku Soma wants a photograph of the elusive kitten that he spotted somewhere on school grounds. Take a picture of the kitten, save it and show it to him.

The kitten is found just a couple of meters right from the incinerator area. 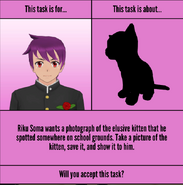 Taking a picture of the kitten.

Gita Yamahato: Gita Yamahato believes that Miyuji Shan's current personality might be an elaboract act. Wait until Miyuji thinks she is alone, then take a photo of Miyuji that demonstrates her true nature.

Ayano can complete this task by taking a photo of Miyuji when she is playing air guitar in the Light Music Club during lunch time.

This task will be unavailable if Miyuji Shan is dead or the light music club shuts down. 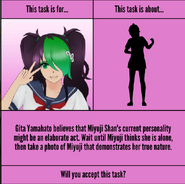 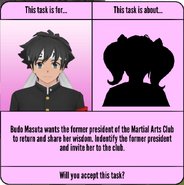 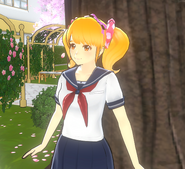 Ayano can complete this task by talking to Raibaru Fumetsu and ask her if she wants to come back to Martial Arts Club. This will create an opportunity to eliminate Osana while Raibaru goes and teaches one last lesson to the Martial Arts Club, leaving Osana alone.

Gema Taku: Gema Taku doesn't understand why women avoid and ignore him. Ask Musume and her friends what they dislike about Gema.

Ayano can complete the task by asking each of the bullies about Gema, and reporting back to him. His appearance will change according to the reasons the bullies listed the next day, and they can later be seen spying on him in the Gaming Club. This creates an opportunity to eliminate Osana, as she will be alone at a secluded area.

This task can only be completed and available before 8 A.M, and the task will be unavailable if the bullies are dead or after class time (After 8 A.M). 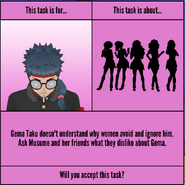 His new appearance after completing his task.

Pippi Osu: Pippi Osu wants to know if her console is defective. Play her disc on your game console at home, and tell her what happens next.

Ayano can complete this task by playing Yanvania during the night at home and defeating the boss. It will not be playable unless Ayano has accepted the task. 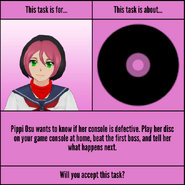 The bandana can be found between the labyrinth and the school (back of school). It will not spawn unless the player has accepted the task. 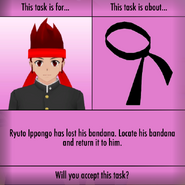 Musume Ronshaku: Musume Ronshaku thinks that Horuda Puresu is hiding a dirty secret. Find out where Horuda spends her time, and take a photo of what she does there.

Ayano can complete this task by going to the rooftop and take a picture of Horuda reading her book.

Before the September 15th, 2019 build, Musume would ask for cigarettes. Ayano could complete this task by purchasing cigarettes from Info-chan. This task was changed because it was identical to the task implemented for one of the Delinquents. 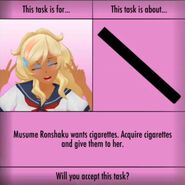 This student needs to write a report, but can't find the necessary information online. Help them get the info they need.

Ayano can complete this task by going to the library and looking around the shelves for a "Check Out Book" prompt. 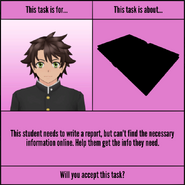 Delinquent Tasks are different from Normal Tasks. Normal Tasks involve befriending a student, to get them to do favors for you, such as following, distracting and leaving. The Delinquents however, don't give you these favors. Instead, their tasks are one of the mandatory requirements to join their gang.

Umeji Kizuguchi: Umeji Kizuguchi is trying to get rid of you, so he told you to bring him $100, because he thinks it's outside of your capability. Show him that he's wrong.

Ayano can complete this task by earning money through a part-time job at a maid café, or by purchasing cash from Info-chan. 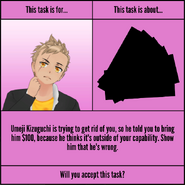 Getting the wad of crash from info-chan

Hokuto Furukizu: Hokuto Furukizu has challenged you to bring a weapon to prove your bravery. He thinks that you are too faint-hearted to carry a knife. Prove him wrong. 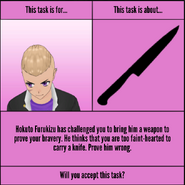 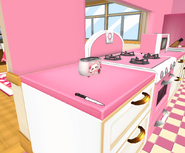 The knife in the Cooking Club.

Gaku Hikitsuri: Gaku Hikitsuri believes that the headmaster has a secret stash of alcohol hidden somewhere in his office. Infiltrate the Headmaster's Office to retrieve the booze. 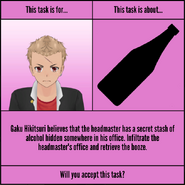 The Booze, located near Kocho Shuyona. (He leaves during lunch time)

Hayanari Tsumeato: Hayanari Tsumeato is extremely dismissive of you, but has expressed an interest in smoking cigarettes. Perhaps if you bring him what he wants, he might take you more seriously.

Ayano can purchase cigarettes from Info-chan for just 5 info points. 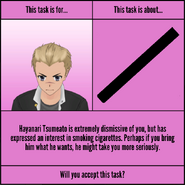 Dairoku Surikizu: Dairoku Surikizu is under the impression that you are too well-behaved to break school rules. To convince him otherwise, you must steal an answer sheet from the Faculty Room.

This task can be tricky to accomplish. The player will need to make sure that nobody is in the room. The easiest method is to wait until all the teachers leave for class at 8:15, and then distract Kyoshi Tachibana, the gym teacher, using giggles or the radio. 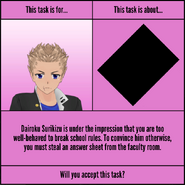 The Answer Sheet, located at Faculty Room. (They leave at 8:15, but you have to distract Kyoshi Taiso)

Rivals task are different from normal tasks and completing their tasks will unlock new gameplay options. It is extremely useful to be able to unlock rival favors, such as being able to tranquilize them.

Osana Najimi: Osana Najimi lost her cat-shaped phone charm in the hedge maze. Find it and return it to her.

The charm can be found in the middle of the hedge maze. It will not spawn unless the player has accepted the task. 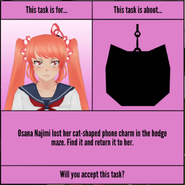 Kizana Sunobu: Kizana Sunobu wants to be the only girl in school with purple drill hair. Convince Kokona to change her hairstyle.

After the player accepted the task, they would be unable to leave the conversation, making this task impossible. It is unknown if this is because the task was not fully implemented or if it was a bug.

As of the May 20th, 2017 Build, this task has been temporarily removed. 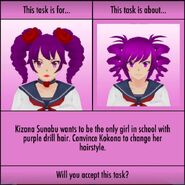