View source
watch 02:56
Raise a Floppa - The Loop
Do you like this video?
Play Sound
This page is for the female Senpai. For her male counterpart, please see Taro Yamada.

Taeko Yamada, also known as Senpai, is the obsession of Ayano Aishi/Ayato Aishi and will be one of the main characters of Yandere Simulator, as well as one of the female students who wil attend Akademi.

The name ”Taeko” is literally written タエコ, but in kanji, such as 多恵子, it can mean "many blessing child". However, there are several other kanji for this name, like 妙子, which means "wonderful child".

Taeko Yamada, with her default look, will have light skin, light charcoal eyes, and long, straight hair. Similarly to Taro, she is supposed to represent a generic high school girl.

Taeko will wear the default female uniform unless customized by the player.

Similarly to Taro, Taeko will be customizable when implemented. The player will likely be able to change her skin tone, accessories, hairstyle, and uniform.

"The Japanese word 'senpai' refers to someone who has seniority over someone else. For example, if you are a first-year student, all second-year and third-year students are your 'senpai'. If you start working at a new job, any co-worker who has been employed at the workplace longer than you is your 'senpai'.

In Yandere Simulator, the title of 'Senpai' is given to the young man (or young woman) that the protagonist is infatuated with. The player is given the option of choosing Senpai's gender at the beginning of the game; they might be 'Senpai-kun', or they might be 'Senpai-chan'. If Senpai is a male, his name is Taro Yamada, and if she is a female, her name is Taeko Yamada.

Over the course of the school year, ten different girls will fall in love with Senpai. There is a myth at school that if a girl confesses her love to a boy under the cherry tree behind the school on a Friday, the two of them will love each other forever. Every girl who falls in love with Senpai plans to confess at 6:00 PM on Friday. If there is anyone who wants to keep Senpai all to herself, she has until 6:00 PM on Friday to eliminate the competition."

Similarly to Taro, Taeko will be portrayed as kind and considerate, but ultimately, a "generic student with no outstanding qualities."

Like Taro, Taeko may have a strong sense of justice and a disdain for people who commit evil behind a veil of anonymity. The sight of a masked murderer would fill her with disgust and cause her to disregard her own safety to unmask them at all costs.

In the future, Taeko will most likely follow the same routine as Taro Yamada:

At 7:05 AM, Taeko enters the school grounds. She walks to her locker at 7:10 AM and changes from her outdoor shoes to her indoor shoes. At 7:15 AM, she walks to the fountain and sits on its edge, reading a book. She doesn't socialize with the other students, other than Osana.

Taeko walks to class again at 1:30 PM and finishes her afternoon classes at 3:30 PM. Afterward, she will remain reading at the fountain until the school day ends. No matter what time the player chooses to leave school, Ayano always watches her go home until she arrives at her house safely.

Additionally, she will follow the schedule of any Rival interactions that Ayano can sabotage.

Hanako will be Taeko's younger sister. Her sister is a childish girly-girl who will try to stop her sister from having a lover. Although their relationship is pretty well, considering that Taeko is completely willing to do anything for her younger sister allowing her to not accept any love confessions.

Osana will be Taeko's childhood friend and she will try to win her heart.

At the beginning of Oka's week, there will be a cutscene that shows how Oka falls in love with Taeko. YandereDev states that it would be a spoiler to say it now.

Just like Taro, Mida and Taeko's Relationship would be very complicated and/or rather hard to explain. Mida will try to seduce Taeko, and though Taeko is not perverted, she will eventually fall in love with her.

In Muja's week, Taeko will pretend to be sick and she will be attracted to Muja. Muja does not seem to have any intentions to seduce her, though still does have an attraction towards her. 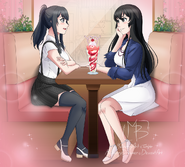 An illustration of Taeko by Mulberry.

Another illustration of Taeko by Mulberry.