View source
watch 02:17
New Pokemon Games - The Loop
Do you like this video?
Play Sound
This page is for Suicide. Not to be confused with Fake Suicide. 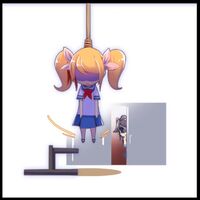 Suicide is a difficult way to eliminate a student in Yandere Simulator. It leaves no evidence towards Ayano Aishi.

The first method of suicide, ruining one's reputation, was implemented in the October 8th, 2015 Build.

To cause a student to commit suicide, Ayano must first gossip about them to damage their reputation. The Gossip page shows how much damage Ayano can deal with certain factors applied.

If a student's reputation is below -33, a group of bullies will write hateful messages on their desk and torment them. This does not apply to the player, though it is required to join the delinquents' eponymous club.

Placing a white chrysanthemum on a living student's desk is a way to bully others in Japan. A flower is typically placed on their desk after a student has died, but if they are still alive the action would mean that someone demands their death.[1] A flower will appear on the student's desk once their reputation is between -50 and -99. Between -50 and -149 reputation, the bullied student will not communicate with other students but will sit on the rooftop alone.

As time passes, the student's reputation will continue to go down. If a rival's reputation is -100 or lower, Senpai will reject her love confession, and the rival will be successfully eliminated.[2] Therefore, it is unnecessary to waste anymore effort. However, Ayano is able to continue the bullying further.

Kokona Haruka sitting at the southeastern part of the rooftop alone.

A table plastered with insults.

If the rival's reputation reaches -150, they will simply not come to school.

The cutscene below is exclusive to the video and does not currently appear in the game. This is because YandereDev wanted to get the build and video demonstrating Suicide out as fast as possible.[3] As of now, any student will simply not come to school instead.[4][5]

After a student commits suicide from the bullying, there will be a memorial service for the deceased student, as this is what happens in real schools.[7]

As of the October 17th, 2015 Build, Ayano is able to torture a student in her basement to decrease the victim's sanity. When the kidnapped student's sanity is at 0%, Ayano can bring them to school and give them a weapon. The mind-slave will then kill a chosen target, before killing themselves by stabbing themselves in the neck. If the police arrive after the two students are dead, they will conclude it was a murder-suicide.

It should be noted that if Ayano tries to frame a student while murdering said student and others and disposing of evidence, the police will similarly treat that situation as a murder-suicide.

However, if the mind-slave's instructed target is themselves, or the target dies before the slave can reach her, she will only commit suicide. She will also commit suicide at the end of the day if she is brought to school but not instructed to kill anyone.

Osana is absolutely devastated about the student's keep harassing her. She decides to commit suicide for bullying.

In the August 31st, 2020 Build/Official demo, if Osana's reputation is -150, Osana will feel absolutely devastated by the unbearable bullying and harassment that she is being subjected to. Afterward, there will be a cutscene where Osana will commit suicide at home. When Osana's mother opens the door, she realizes that Osana had hanged herself, meaning she had committed suicide.

Afterwards, Osana's memorial service will take place in school and cause Senpai to stay home from school for one day to mourn Osana's death on subsequent day