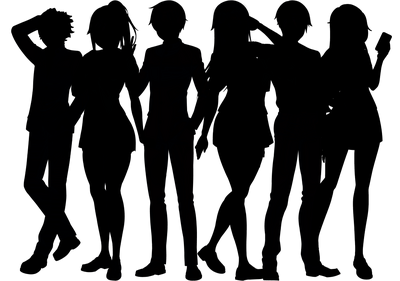 Students are NPCs that attend Akademi High School, the main setting of the game Yandere Simulator.

Including Ayano Aishi, there are 89 students who attend class at Akademi. Eight of these students are rivals, and seven of them will not appear during Week 1 for various reasons.

As of the September 15th 2019 build, there are no more temporary students, meaning every student the player encounters will be present in the final game.

Most students follow a specific routine. Currently, the only implemented students that do not have a specific set routine are Ayano Aishi, Info-chan, and the Phantom Girl.

Former students from the 1980s. They all still play an important role in Yandere Simulator.

Victim-chan and Witness-chan can be seen in the JSON file of some old updates (from March 1st, 2015 to April 8th, 2015) as well as the "How To Get Away With Murder In Yandere Simulator" video, but never appear in-game. Witness-chan can now be found in the town, in front of the maid café.

The original delinquents were replaced in the April 26th, 2018 Build. They may appear in 1980s Mode according to YandereDev. In one of his videos, it was shown that they went into some sort of time machine. This was accidentally published in a build when the Delinquents were added in 2018, but was quickly taken out in the next build.

Red Flower was the 6th member of the Gardening Club and was later removed in the July 1st, 2018 Build due to the club being fully implemented. The other members have updated hair colors and names, but remain in the club.

The "Rainbow Twelve" male and female students were also removed in the August 18th, 2018 Build. Out of both groups, only Riku Somatomo, Saki Mayuzumi, and Kokona Harukawa remain in the game. It was decided that they should be removed since the framerate improves without them, but they may come back in the future. The 4 rainbow girls who were removed from the school now appear in the town as normal pedestrians walking around.

Study-kun A and Study-kun B were removed in the January 1st, 2019 Build as they are no longer needed to show attraction from a rival.

Rival-chan was officially removed in the July 18th, 2019 build and replaced by Raibaru Fumetsu, who has the same appearance.

Although they are removed, YandereDev stated that they might be added in 1980s Mode. He might also add them back if the framerate significantly improves.

Several students and their hair, as shown on a page on Druelbozo's DeviantArt.

More hair models from Druelbozo of DeviantArt, on its own page.

A full body reference of the rainbow six.

A preview of more students, shown in the 'New Build Coming Soon.' Blogpost.
Add a photo to this gallery

Retrieved from "https://yandere-simulator.fandom.com/wiki/Students?oldid=502821"
Community content is available under CC-BY-SA unless otherwise noted.