The Sports Club is a club in Akademi.

It is a combination of the Swim Team and the Track Team.[1] 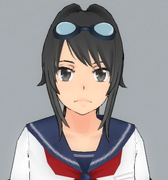 To join the club, the player will have to talk to the substitute club leader, Itachi Zametora, and select the "Join" option on the interaction wheel. Afterward, they can participate in club activities. After joining, the player will wear swim goggles on their head.

If Ayano joins the Sports Club, she will run faster and be able to carry sports equipment anywhere without being considered suspicious. Joining the Sports Club will allow Ayano to run six meters per second, if not combined with other factors.[2]

Students will go down to the track and jog. If the player joins in club activities from 5:00 PM to 6:00 PM, she will race around the track and swim in the pool.

The player can wield a baseball bat and a dumbbell without being considered suspicious when in this club.

Being kicked out from the Sports Club.

The sports club has been disbanded.

Ayano will not be kicked out of this club if any member of the club witnesses her murder on the previous day, as they attempt to apprehend Ayano. However, she'll be kicked out if she does not participate in club activities at least once a week. If the president dies, goes missing, or if there are less than five members in the club, the club will disband. 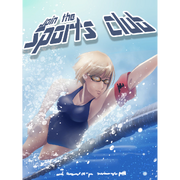 The Sports Club running on the track.

The Sports Club swimming in the pool.

The sports club stretching in their old gym uniforms.

The sports club stretching in their new gym uniforms.

Going into the locker room. 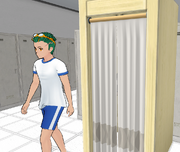 Inside the male locker room. 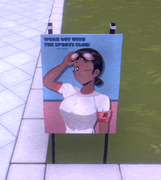