The Shower Room is a location in Yandere Simulator where students will be able to change their uniform in the future. It is located by the Outdoor Cafeteria. It is not to be confused with the Locker Room.

This location can be used for killing students, changing outfits, drowning people,[1] or taking nude photos of students.[2] The room has not been fully implemented yet.

When in the girls' locker room, Ayano can change her clothes between the school uniform, the school gym uniform, the school swimsuit, or a towel. Only two lockers are able to be opened at this time: Kokona Haruka's and Ayano's. In the future, students will also react to theft, especially of their clothing, but it is unknown so far what will happen next, or even to Ayano. [3]

In the future, Ayano may not be able to steal uniforms at all. Programming to do so would require changing a lot of students' AI and cause a lot of programming problems. YandereDev wants to avoid implementing this as of the March 2016 FAQ.[4]

On Thursday at 7:15 AM, Kokona Haruka will go take a shower. She will leave her phone in her locker, which the player can steal.

As of July 25th, 2018, Ayano can no longer leave the girls' locker room whilst nude unless using debug commands or Easter Eggs.

It hasn't been confirmed if Ayano will be able to access this room in the future. One of the reasons to go in there, as stated by YandereDev, would be to admire or steal something from Senpai.[5]

This room contains a horizontal bath facing a painting of a mountain and three rows of stations for students to wash off. Of the August 20th, 2015 Build, when the protagonist is bloody, she must bathe in one of the stools closest to the girls' locker room. It will take around four seconds to wash off. She can then change into a new uniform. She must then dispose of the bloodied uniform at the incinerator or risk a Game Over due to incriminating evidence.

Since the school is rich, there will be a bathing room right next to this room. People will bathe in that room, and there will be the option to drown them, but there are no animations for this action at the moment.[1] If in the future, if Ayano drowns someone here, the body will have to be hidden.[6] 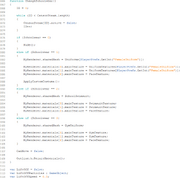 Some of YandereDev's Shower Room code (circa 2015)

The uniforms in the locker.

Retrieved from "https://yandere-simulator.fandom.com/wiki/Shower_Room?oldid=497322"
Community content is available under CC-BY-SA unless otherwise noted.