View source
watch 02:52
Roblox: DeepWoken - The Loop
Do you like this video?
Play Sound

Shiromi Torayoshi is one of the female students who currently attends Akademi. She is the Treasurer of the Student Council.

She has short, white hair with 2 black clips on the left side and black eyes with no irises. She wears a white scarf with a black tiger pattern and similar kneesocks, and her bust size is 0.5.

As of the April 17th, 2021 build, her hair model has been changed as well as her scarf and socks. You are now able to see her bow tie sticking out from underneath her scarf. Her eyebrows are now also the same color as her hair.

"Shiromi Torayoshi is the treasurer of the student council. She's a peculiar young woman whose intentions are never clear. She is known for smiling at almost every hour of the day, in every type of situation, which is unsettling to some students.

Shiromi is an enigma; very few students know anything about her. Just about the only thing that anyone knows for certain is that she is very eccentric, and takes pleasure in performing harmless pranks on other students."

"Treasurer of the student council. A mysterious & enigmatic young woman. Known to be calm & relaxed at all times. Some students find her unsettling."

Among the personas currently implemented in the game, Shiromi is Dangerous. If she sees Ayano murder anyone, she will run up, spray her with pepper spray, and restrain her. She will push Ayano away if she gets too close and will spray her with pepper spray if she attempts to kill her without stealth or if she gets too close to her five times. She will break up fights between Ayano and a delinquent by standing in between them. She eats a chocolate bar while doing so. If Ayano aims her phone at Shiromi, she'll stand still but will show no reaction. Intimidation will also not work on Shiromi if Ayano attempts to intimidate her when she has joined the delinquents. Shiromi is also not affected by seduction.

She is eccentric, peculiar, and has unclear intentions. She smiles often in many different types of situations. There is a rumor that she spies on students, stalks students, and records their conversations.[1]

She often giggles for no reason and has many quirks.[2] She has many hobbies including soap carving and trainspotting.[3]

Despite her eccentricities, she has a fairly normal way of approaching romance.[4]

If she were kicked out of the Student Council, she would be bummed out for a while as she is fond of the other members.[4]

At 7:00 AM, Shiromi leaves the Student Council Room and will begin patrolling around the exterior of the school, starting with the plaza. She also patrols the Incinerator area. The only club she patrols is the Gardening Club.

At 8:00 AM, Shiromi walks to Classroom 1-1, sits at her desk, and plays around on her phone before her classes start. She starts her morning classes at 8:30 AM, and leaves to go patrol the exterior again at 1:00 PM.

She walks back to class again at 1:22 PM, sits at her desk, and plays around on her phone again until her next classes start. Her next classes start at 1:30 PM. At 3:30 PM, Shiromi goes back to patrolling the exterior again. At 4:00 PM, she heads to the Student Council Room and stays there for the rest of the day. On Fridays at 3:30 PM, Shiromi will go to the Meeting Room and meet up together with the rest of the Student Council and all the club leaders to have a meeting.

The topics towards Shiromi are (Negative/Positive/Neutral) as follows:

Shiromi with the rest of the Student Council.

Shiromi in "The Student Council in Yandere Simulator (Story Focus)".

An illustration of Shiromi from the 5th Anniversary blog post 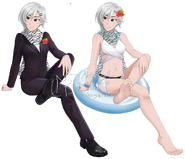 An illustration of Shiromi by Mulberry Art.

Another illustration of Shiromi by Mulberry Art. 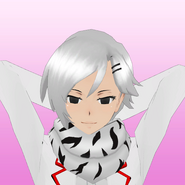 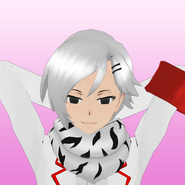 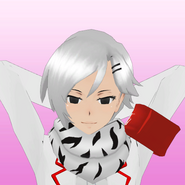 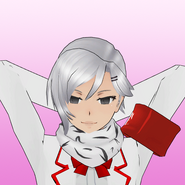 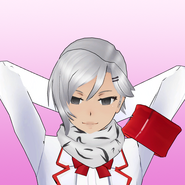 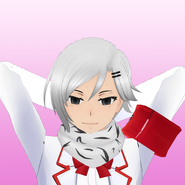 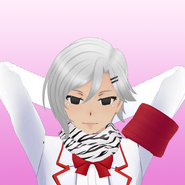 Shiromi patrolling the exterior of the school.

Shiromi playing around on her phone before her classes start in-game. 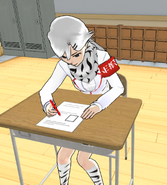 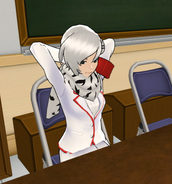 Shiromi in the Meeting Room.