Shima Shiya, whose real name is Shima Shibahara, is one of the female students that currently attends Akademi High School.

Shima wears the default female school uniform, unless customized by the player.

Before the February 15th, 2016 Build, she had sparkly orange hair and matching orange eyes.

As of the February 15th, 2016 Build, she has short, orange hair with an ahoge sticking out from the top. Her bangs are short and cover her forehead, and she has orange eyes.

As of the February 19th, 2019 Build, her hair color is a shade of tan while her eyes are a light burgundy.

When in the Martial Arts Club, she dons a traditional karate gi.

Shima Shiya also wears a white headband with the kanji "必" and "勝", which combined means "victory". She has fair skin, and her bust size is 1. If the club disbands, she will not wear the headband anymore.

Among the personas currently in the game, she is Heroic. If she sees the player murder anyone, she will run to fight them. She can fight against murderers, but has weak self-defense. She will give Ayano a suspicious look if Ayano aims her phone at her.

According to the info in her Student Profile, she wanted to start a wrestling club but couldn't gather enough members and settled for joining the Martial Arts Club.

She aspires to become a professional wrestler and constantly frustrates Budo by choosing to do flashy wrestling moves instead of using proper martial arts techniques.

At 7:09 AM, Shima enters the school grounds. She walks to her locker at 7:10 AM and changes from her outdoor shoes to her indoor shoes. At 7:15 AM, she walks to the Martial Arts Club on the second floor, where she changes into her gi and proceeds to watch Mina Rai and Sho Kunin practicing their martial arts. She also goes to the Japanese Gardens with the rest of the Martial Arts Club members and observes Sho and Mina there as well.

Shima walks back to class again at 1:30 PM and participates in cleaning time between 3:30 PM and 4:00 PM. Afterwards, she heads to the Martial Arts Club and stays there until the end of the day. If Ayano joins in club activities, she practices kicking with other members from 5:30 PM to 6:00 PM.

If the Martial Arts Club is inactive, she will socialize with the other former members outside of the club during periods when she would normally attend it (7:15 AM, 1:00 PM, and 3:30 PM).

The topics towards Shima are (Negative/Positive/Neutral) as follows:

An illustration of Shima from the the third anniversary blogpost. 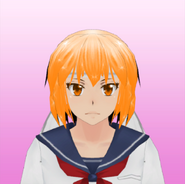 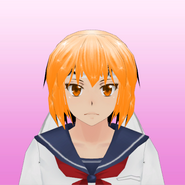 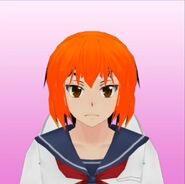 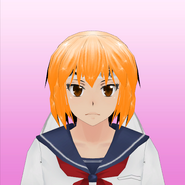 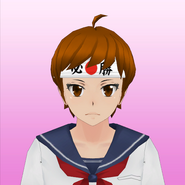 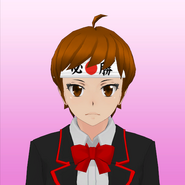 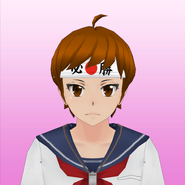 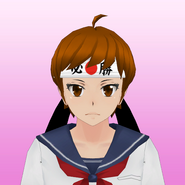 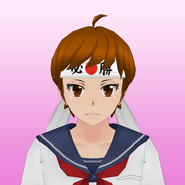 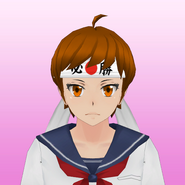 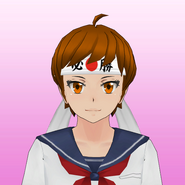 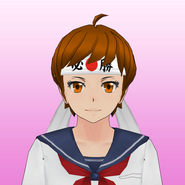 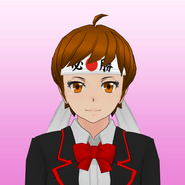 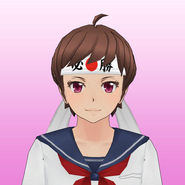 Shima watching Sho and Mina practice in one of the Japanese Gardens. 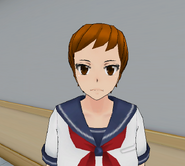 Shima without her headband.

Shima playing with her phone before classes.
Add a photo to this gallery

Retrieved from "https://yandere-simulator.fandom.com/wiki/Shima_Shiya?oldid=499062"
Community content is available under CC-BY-SA unless otherwise noted.