Self-Defense is a game mechanic in Yandere Simulator determining how well Ayano Aishi and other NPCs will fare in a fight. 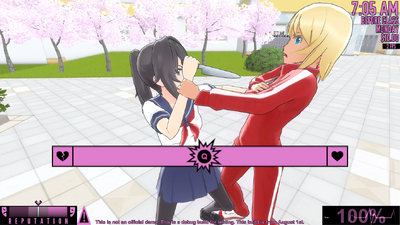 In most cases, when a Heroic or Strict NPC sees Ayano committing murder, they will run up and attempt to apprehend Ayano, triggering a struggle mini-game. The mini-game will also trigger if Ayano attempts to directly attack a Teacher.

If Ayano does not equip a small, concealable weapon (such as a knife) when the mini-game starts, she will automatically lose, regardless of her physical education level or her opponent's self-defense level. 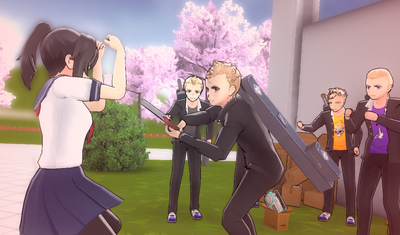 This mini-game can only be triggered by the Delinquents, who all have the Violent persona. When Ayano provokes them into fighting her (by holding a weapon near them or bumping into them five times), this mini-game will start.

The difficulty of the mini-game is determined by Ayano's physical education. If Ayano wins, the delinquent will be drop his weapon and will be too injured to fight or push Ayano for the rest of the day. If Ayano loses, the delinquent will see that Ayano is unable to fight any longer and leaves her off with a warning. Ayano will then be injured for the rest of the day (but she is still able to fight them again). If they see Ayano commit murder, they will not stop fighting her until she is knocked out or they are dead. 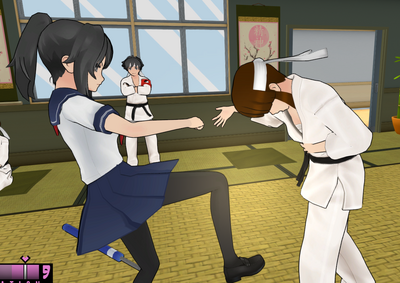 This mini-game is very similar to the fighting mini-game. Ayano can spar with any of the members of the Martial Arts Club, supposedly to train her in a real fight. If Ayano loses, she will not be injured throughout the day.

This mini-game can be triggered by talking to Budo Masuta, leader of the Martial Arts Club, while he is in the club room or at the zen garden. Budo himself can be also be sparred with, but he is very difficult to beat, even with Ayano's physical education maxed out.

These are the various levels of self-defense for NPCs:

Raibaru Fumetsu is currently the only student in the game to have this self-defense level, making her the strongest character to appear in the game so far. She is the friend and bodyguard of rival Osana Najimi. Due to her mastery in martial arts, she cannot be killed directly with a weapon, as doing so will always lead to instant apprehension and game over. The same thing will also happen if she catches Ayano committing murder. She can even fend off a mindslave attack, which supposedly have superhuman strength.

However, she is not 100% invincible, as she can still be killed using a number of different ways (such as poisoning and drowning). She can also be rendered vulnerable when a mindslave is attacking her, allowing Ayano to assist the mindslave and successfully stab and kill her.

It is possible that Osoro Shidesu will also have this self-defense level, since YandereDev hinted that she is as strong as Raibaru.

Because of a past incident in the 1980s, all teachers, including Kyoshi Taiso, are trained extensively in self-defense.[1] As such, their struggle mini-game is the most difficult in the game, requiring at least Rank 1 in Physical Education to even start the mini-game (or Ayano will be apprehended instantly). Beating them with low Physical Education levels is extremely difficult. They also cannot be stealth killed, as even attacking them from behind will still trigger the mini-game. They also cannot be killed with a large weapon. Doing so will lead to Ayano getting apprehended instantly.

Budo Masuta and Itachi Zametora have this level of self-defense. All the Delinquents will also have this self-defense level if they are not allowed to bring weapons to school by the guidance counselor, arguably making them a bigger threat to Ayano. Their struggle mini-game is somewhat easier than Teachers, but they are still very difficult to beat at Rank 1 in Physical Education. Unlike Teachers, they will not put up a fight when directly attacked by Ayano, though they will still try to chase her down and apprehend her if they see her commit a crime. It is noted that some

Mina Rai and Hojiro Zameshiro are the ones whose self-defense level is very strong. They are slightly weaker than Budo, but are still difficult to beat in the struggle mini-game.

Sho Kunin, Fureddo Jonzu and Unagi Denkashiza have this level of self-defense. They are opponents whose mini-game is of moderate difficulty. Though Fureddo has the Sleuth persona, he can still fight Ayano.

Shima Shita and Iruka Dorufino have this level of self-defense. They are easier to beat in the struggle mini-game, however they still have the capability to defeat Ayano.

Juku Ren, Mantaro Sashimasu, Kyuji Konagawa, Toga Tabara, Himari Fujita and Osana Najimi have this level of self-defense, but only Juku, Himari and Mantaro can actually fight Ayano, as they have the heroic persona. Their struggle mini-game is very easy, but they still are capable of defeating Ayano.

Should they end up fighting Ayano, their struggle mini-game is so easy that even if Ayano's physical education is zero, they will always end up losing to Ayano (as the mini-game slider never moves towards the broken heart). They still can, however, apprehend Ayano if she isn't holding a concealable weapon when the mini-game starts, or if there are four of them (at which point they will all pin her to the ground).

Senpai also have this self-defense level and will never engage in a struggle mini-game. However, while other NPCs have to run up and apprehend Ayano, Senpai merely has to witness Ayano doing anything incriminating to cause an instant game over, technically making him an extremely powerful character in-game. Also, as of the April 24th 2019 build, if Senpai catches Ayano committing a murder while she is wearing a mask, he will rush towards her and rip the mask off her face, also causing an instant game over.

All students from the Student Council have this level of self-defense. Instead of initiating a struggle mini-game, they will pepper spray Ayano if she bumps into them five times, gets too close to them with a weapon, or see her commit murder, leading to an instant game over. If they catch Ayano doing something suspicious, but not incriminating, they will instead just send her to the guidance counselor. It is possible to kill them without stealth, as long as Ayano keeps her distance when attacking. In Mission Mode, Ayano can pay Info-Chan to get any of the student council members fired, causing them to lose their pepper spray and act like a normal student. However, if they catch Ayano committing a crime, they will still try to apprehend her unarmed, like a Heroic student normally would.

All the delinquents have this level of self-defense. They are all armed with melee weapons and will use them when fighting Ayano. If they are defeated in the fighting mini-game, they will be disarmed and will not be able to fight again for the rest of the day. If a disarmed delinquent sees Ayano commit a crime, instead of fighting her, they will run out of the school compound. If the delinquents are no longer allowed to bring weapons to school, their self-defense level changes to Peak Physical Strength. They will still push Ayano, but will never fight her again, unless they see her commit murder.

To increase their physical education, the player must allocate 20 points into the physical education stat per rank. The higher their rank is, the easier it is to beat Heroes and teachers. When starting the game, they are at Rank 1 by default. Rank 6 is the highest rank.

Retrieved from "https://yandere-simulator.fandom.com/wiki/Self-Defense?oldid=495213"
Community content is available under CC-BY-SA unless otherwise noted.