The Science Club is a club in Akademi.

The room is not the same as the Biology Lab and Science Lab.

The Science Club is located on the third floor in the west wing. It has a gray floor and walls, and a black ceiling with green lights.

Each club member has a work station that fits their area of expertise. In the center of the back wall, Kaga has a super computer with two holographic walls on either side. In the back left corner, Horo has a series of holographic displays that he controls with a tablet. Along the front wall, Yaku works at a chemistry table, and Meka works on a machine that sits on the floor. In the back right corner, Homo has a large platform where a robot version of her dead twin sister stands.

Along the right wall is a changing station where members of the club change out of their school uniforms and into their club uniforms. A science vacuum and three blowtorches rest on the table by the left door. There is a large vat of acid beside the right door.

Akademi is bankrolled by the Saikou Corporation, the most wealthy conglomerate in the world. As a result, Akademi is one of the most well-funded schools on Earth, which has always attracted the attention of young entrepreneurs and inventors who are seeking the resources necessary develop new technologies. Every year, the Science Club attracts the smartest and most ambitious minds of Akademi.

Horo Guramu is a brilliant young man who made international news after making incredible contributions to the field of holographic technology. He is currently attempting to figure out how to bring down the cost of manufacturing his inventions so that holographic display devices can become affordable enough for any household. He is a straight-faced and serious young man who rarely shows emotion.

Yaku Zaishi is a chemist who is obsessed with combining various chemicals to observe the results. He is less accomplished than his peers, and is vague and evasive whenever he is questioned about his intentions. He is single-handedly responsible for the majority of noise complaints at Akademi, as his chemical experiments have been known to result in loud explosions. His head-mounted device is capable of detecting and displaying his current emotions, which have been observed to change at the drop of a hat. He is a big fan of anime and video games, and is constantly attempting to convince his peers to indulge in his hobbies.

Meka Nikaru has dedicated her life to specializing in the field of robotics in order to achieve her lifelong dream of building a giant bipedal robot. This dream was inspired by the giant robots present in Japanese animation. She is known to exhibit an overbearing enthusiasm for mecha anime. She has already built several bipedal robots, most of them quite small in size - but each one she builds is always larger and more impressive than the previous one, as she slowly works towards her goal of building a robot as tall as the school building.

Homo Kurusu specializes in the fields of robotics and artificial intelligence. She was once a friendly and cheerful young woman, but became cold and asocial - almost robotic - after witnessing the death of her twin sister. She dedicates the majority of her time towards the construction of what appears to be a robotic replica of herself in the Science Club. While some people are quick to dismiss this as an act of narcissism, there are others who theorize that she is attempting to build a replica of her dead twin, in order to "resurrect" her sister from the grave.[1] 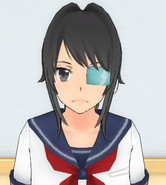 To join the club, the player must talk to Kaga and select the "Join" option on the interaction wheel. Afterwards, they can participate in club activities. After joining, Ayano will wear a futuristic visor over her left eye.

Ayano will have access to technology that will make it easier to defeat rivals. As of now, the only technology she can access is a science vacuum that can clean bloodstains.

There are also useful tools inside the room that Ayano can use without being a member of the Science Club. The blowtorches inside the room can be used to cauterize the wound of a bleeding corpse, which will prevent the corpse from leaving pools of blood behind while being dragged across the floor. The blowtorches can also be used to heat the ritual knife in order to perform the Flame Demon's ritual.

There is also a vat of acid that can be used to dispose of corpses and other types of evidence. Once placed in the container, whatever is inside will be slowly dissolved, including metal, leaving nothing behind. Ayano now has to be a member of the club to access this.

About to participate in the Science Club activity.

Participating in the activity.

Science Club Students will regularly go to Storage Rooms for supplies and use this room after school. If Ayano joins in club activities, she will take part in a variety of scientific experiments, with some explosions involved.

Students in the school consider the members of the Science Club to be extremely weird, and similar to "junior mad scientists". Their specialty is robotics, and the goal of their club is to get hired by a prestigious company known as Saikou Corp by inventing new and useful technology while they are just students. Because of this, they spend their time (and club activities) building useful robots, like the science vacuum.[1]

Being kicked out from the Science Club.

Science Club being shuts down.

Ayano will be kicked out if any member of the club witness her kill another student on the previous day. In the future, she will also be kicked out if she does not participate in club activities at least once a week. If the president dies or if there are less than five members in the club, the club will disband. Once the club closes, the door to the room will be locked.

An illustration of what the clubroom may look like in the future. Shown in March Progress Report. 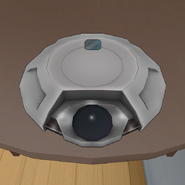 The vacuum inside the Science Club.

The blowtorches inside the Science Club.

Joining the Science Club in the February 1st, 2016 Build.

Participating in the Science Club activity in the February 1st, 2016 Build. 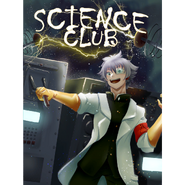 The Science Club Room textures and light by Qvajangel. 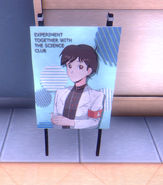 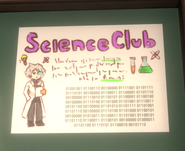 Poster of Science Club in hallway