The School Atmosphere is an important feature in Yandere Simulator that determines how characters at Akademi High School behave after certain events.

Depending on Ayano Aishi's actions, the School Atmosphere will change, and by extension, the difficulty of overall gameplay will be impacted.

If Ayano commits murder and doesn't dispose of the corpses, or leaves other forms of evidence, the School Atmosphere will decrease. Characters will have their cone of vision increased, and will give increased reputation penalties, should they see something suspicious. In the future, students may lock their lockers if they become paranoid, not allowing you to use certain game mechanics like note writing or stealing phones, affecting the difficulty and your strategy in gameplay.[2] 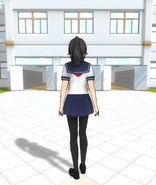 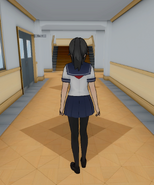 High School Atmosphere in the hallway.

This is the default and normal School Atmosphere. Students during high School Atmosphere all have a short range of sight, and will give Ayano a lower reputation penalty of ten points if she is caught committing a criminal, inappropriate, or suspicious act. When passing by Ayano, they will overlook her sanity, uniform, and any weapons visibly held unless she is within their cone of vision. They will react to screams only from short distances, making it easier to commit murder. High School Atmosphere is between 100-70%. 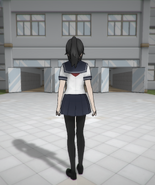 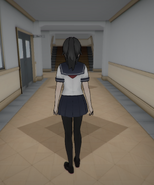 Medium School Atmosphere in the hallway. 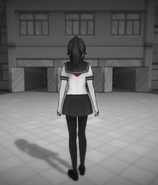 Low School Atmosphere in the hallway.

When School Atmosphere is 20% or lower, the environment is much darker, making it hard to see from a distance. The music is warped and off-beat. Students are very paranoid at this stage, will react more quickly to dangerous situations, and will react (become scared) to Ayano's footsteps. Ayano's reputation drops by twenty points when she is caught doing criminal activities, so it will take longer to regain a positive reputation. Every students will refuse to do Ayano's favor, meaning Ayano cannot follow them, distract to another students, or tell them to go away of the school atmosphere lower. It may be possible in the future to hear thunder sound effects in this atmosphere.[3] Security cameras and metal detectors will be installed if a faculty member or Student Council member had been killed earlier(the day before).

If the Demonic Ritual has been completed, the School Atmosphere will automatically be at 20%.

Paranoid NPCs are constantly looking around, thus increasing their range of sight. They are continuously trying to spot the criminal. When caught in criminal activities, Ayano's reputation decreases dramatically. Students will also react to bloodstains, weapons, and other suspicious activity from far distances, making it very difficult to murder a student without being caught. Students will also be inclined to inform teachers about suspicious evidence (like weapons stained with blood and bloodstains on the floor), which could increase the speed of the police's arrival and increase the difficulty of the game.

Teachers are also programmed to be paranoid during the low School Atmosphere. The majority of the students and teachers in school will be affected, with the exception of Budo Masuta (unless the club disbands), Tsuruzo Yamazaki, Shin Higaku, Miyuji Shan, Uekiya Engeika, Kaga Kusha, Itachi Zametora, Kyoshi Taiso, the Sleuths, and the Bullies.

In the future, footstep sounds will make it much harder to sneak up on a paranoid student. Ayano will have to either crouch or crawl up to them to stay undetected. There may be different paranoid animations as well, depending on the level of atmosphere.[4]

They are generally not threatening if the School Atmosphere is high, but the more it lowers, the more dangerous they get. When School Atmosphere is low (starting from Middle Atmosphere), sleuths will start to be on the lookout for any criminal activity, by checking in on every student. If they catch Ayano committing any crimes, they will take a picture and immediately send it to the police, resulting in an instant Game Over. If Ayano is part of the Photography Club, they will not suspect her of being the murderer, so they will stay away from her.

In the future, there will be a more active way to restore School Atmosphere, such as framing a rival. When someone is framed and arrested, the School Atmosphere will return to 100% as the students believe the killer has been caught.

There will be no way to restore school atmosphere if the player murders one of the Student Council members. This will result in Megami Saikou installing security cameras and metal detectors at school the following day, therefore permanently setting the game to the hardest difficulty mode and leaving school atmosphere to 0%.

YandereDev stated that in the full game, School Atmosphere will carry over from week to week.[5] 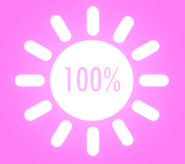