Saki Miyu, whose real name is Saki Mayuzumi, is one of the female students who currently attends Akademi.

Saki wears the default school uniform unless customized by the player.

Her eyes are cyan. She has fair skin and the second largest bust size in the game, at 1.8. Her hair is cyan; it is styled into long pigtails that reach her elbows. Her bangs are swept to the left. Some shorter pieces of hair hang down the sides of her head and curl inwards towards her face. As a member of the Cooking Club, she wears a purple kerchief and a matching purple apron patterned with small hearts. If the Cooking Club is disbanded, Saki will remove her kerchief and apron for the rest of the game.

From her implementation in the March 1st, 2015 Build until the February 8th, 2016 Build, Saki had light cyan eyes and cyan twintails that YandereDev created using the model for Ayano's ponytail in a bigger size.

From February 8th, 2016 Build until the March 1st, 2017 Build, Saki had dark cyan hair with short bangs swept to the right and slightly bent locks framing her face; the rest of her hair was left parted and tied up in twintails that ended in spirals.

In the January 16th, 2017 Build, friendship bracelets were added to the right wrists of the Rainbow Six girls. Saki's is cyan.

From March 1st, 2017 Build to the August 18th, 2018 Build, Saki had thick cyan twintails ending in spirals held by two bright cyan bands, short bangs meeting in the middle of her forehead, curled locks framing her face, and a small ahoge at her part.

From the August 18th, 2018 Build to the December 3rd, 2018 Build, Saki's hair returned to thinner spiral twintails reminiscent of her 2016-2017 hair; however, her face-framing locks were shortened and curled at the ends, her bangs were brushed straight forward and not parted, and the shade was made slightly more green. A purple Cooking Club kerchief was also added, along with a light pink polka-dotted apron. Her cyan thigh-high stockings, panties, and friendship bracelet were removed.

As of the August 22nd, 2018 Build, Saki's cyan friendship bracelet was restored.

As of the December 2nd, 2018 Build, Saki's apron is a polka-dotted purple that matches her kerchief.

As of the December 3, 2018, Build, Saki's hair has been changed. She had thicker, more textured, spiral ringlets on either sides of her head. Her bangs are straight and blunt, cute neatly to her eyebrows. Her face-framing locks are more layered; her kerchief is also slightly lighter and her facial details were changed to give the appearance of blush and subtle pink lip gloss.

From the January 17, 2019, Build to the February 1st, 2019 Build, Saki's eyes and eyelashes were a noticeably brighter and more vibrant cyan.

As of the February 1st, 2019 Build, Saki's eyes and eyelashes have been reverted to a darker, more subtle, cyan.

As of the March 31st, 2020 Build, her hairstyle was changed again, and it now resembles one of her hair's earlier versions. Her twintails are straight, her bangs become partially side-swept, and plum purple scrunchies now hold her pigtails in place. Her facial details have also been reduced somewhat.

As of the September 16th Build, Saki's hair has changed once again.

As of April 2nd, 2021, Saki's new hair texture was recolored to have a green tint. Since it got negative feedback from fans, it was recolored again as of June 1st 2021, but still had the green tint. Finally, as of June 16th, 2021, her hair color was reverted back to the one from the September 16th, 2020 Build, but with a different eye texture.

"Loves sweets, candy, and desserts. Never gets fat, no matter how much junk food she eats. Kokona Haruka's best friend and closest confidant. Kokona is likely to discuss personal matters with this girl."

Among the personas that are currently implemented in the game, Saki is a Social Butterfly. She will happily pose for a picture if the player aims their camera at her face. If she sees a corpse or witnesses a murder, she will run to the nearest crowded area and call the police. She cannot participate in physical fights against murderers, unless they kill Kokona Haruka.

She loves sweets, candy, and desserts. She never gets fat, no matter how much junk food she eats.

At 7:05 AM, Saki enters the school grounds with the other members of the Cooking Club. She walks to her locker at 7:10 AM and changes from her outdoor shoes to her indoor shoes. At 7:15 AM, she walks to the Cooking Club and prepares food with the rest of the members there. She then travels around the school to give the food to various students.

At 8:00 AM, Saki walks into Classroom 1-1 and sits at her desk. She starts her morning classes at 8:30 AM, then leaves the classroom at 1:00 PM to eat lunch with the Cooking Club.

Saki walks back to class again at 1:30 PM and participates in cleaning time between 3:30 PM and 4:00 PM. Afterward, she heads to the Cooking Club and stays there until the end of the day. If Ayano joins in club activities, she will prepare a meal from 5:30 PM to 6:00 PM.

If the Cooking Club is disbanded, she will socialize with the other former members outside of the club during the periods in which she would normally attend it.

As of the March 22nd, 2021 build, Saki spends her time conversing with Kokona instead of spending her time at the Cooking Club and giving food to students. At 7:00 AM, she runs to her locker and changes her shoes, then quickly runs outside the school gates, where she will converse with Kokona. At 7:09 AM, she and Kokona will move to the rooftop to socialize. Towards the end of the day, she will run to the Cooking Club to participate in club activities with Ajia.

During Week 2, Saki will stand in the plaza with her fellow Cooking Club members and Amai, conversing with Ajia Ashitomi.

Saki's task is to find her bra. Her bra is sitting near the Confession Tree against the fence. Once the player collects and brings it back to her, Saki will be very happy and will become Ayano's friend.

Due to Kokona's family debt, Saki tried to help them make money. She attempted to sell her underwear to boys. At one point, she tried to sell her bra, but could not go through with it and threw it over the fence, which is why the player has to retrieve it for her in order to complete her task.

According to her Student Profile, Saki Miyu is Kokona Haruka's best friend and closest confidant. Saki will attack Ayano if Kokona is murdered in front of her. The same goes for Saki being murdered in front of Kokona. Still, they have very weak self-defense, so the player can easily beat them in a struggle minigame.

The topics Saki feels Negative/Positive/Neutral towards are as follows:

Saki in Bucket Based Murder in Yandere Simulator.

An illustration of Saki with the rainbow six shown in Mid-January Progress Report.

An illustration of Saki from the the third anniversary blog post. 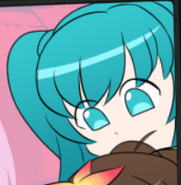 An illustration of Saki from the 5th Anniversary blog post 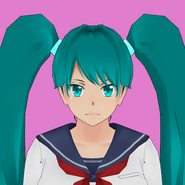 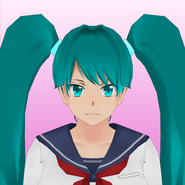 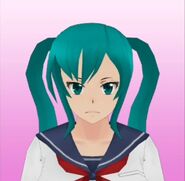 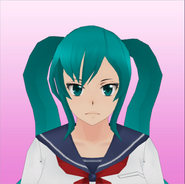 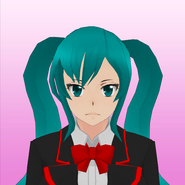 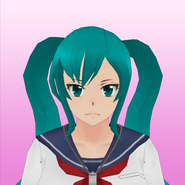 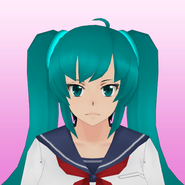 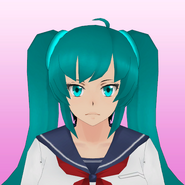 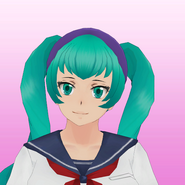 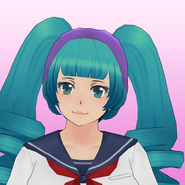 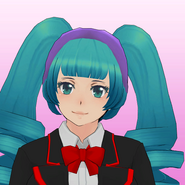 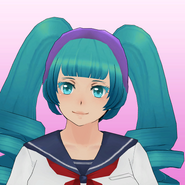 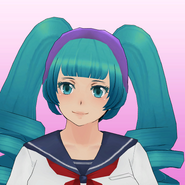 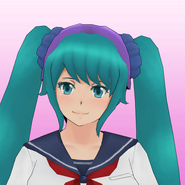 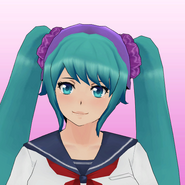 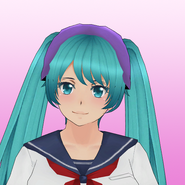 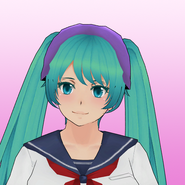 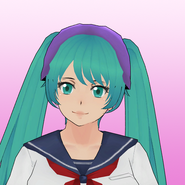 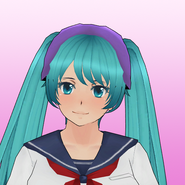 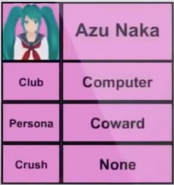 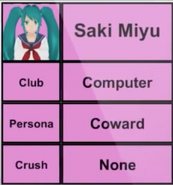 Full image of Saki's hairstyle as of the February 8th, 2016 Build.

A full-body reference of Saki with the rainbow six.

Saki conversing with Kokona outside the school a bit far away from the school gates.

Saki conversing with Kokona at the rooftop.