The ritual knife is a weapon and a tool used to summon demons in Yandere Simulator. It is not to be confused with the knife.

If Ayano kills a student with a ritual knife and places it back into the skull on the altar, she will start a Demonic Ritual.

In the future, if a student spots Ayano holding the weapon while she is not part of the club, she will be called a thief and it will be taken away from her. Student AI and path finding will have to be revamped before this happens.[1]

There are 4 killing animations for the ritual knife depending on Ayano's level of sanity. 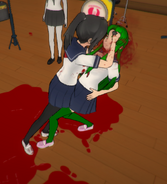 Stealth Kill.
Add a photo to this gallery

The police finding a corpse that was killed by the ritual knife. 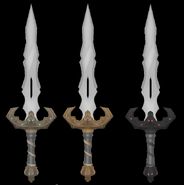 Variations of the ritual knife.

More variations of the ritual knife.
Add a photo to this gallery

Retrieved from "https://yandere-simulator.fandom.com/wiki/Ritual_Knife?oldid=474618"
Community content is available under CC-BY-SA unless otherwise noted.