Rejection is a non-lethal method used to eliminate rivals in Yandere Simulator.

Senpai is not able to fall in love with rivals on his own accord. He will start to develop a crush on a rival if she has five interaction events with him. Once a day, there will be an "event" with Senpai, with the final event being a love confession. Ayano Aishi will be able to sabotage each event.[1] If she sabotages all five events, Senpai will reject the rival's love confession. Sabotaging four or less will make the outcome depend on the reputation of the rival.[2]

Damaging a rival's reputation by gossiping about them is another way to make Senpai reject her love confession, as Senpai can never love someone with a low reputation. Senpai will reject a love confession from Ayano or a rival if their reputation is below -100.

It may be possible in the future to provoke a rival enough for them to attack Ayano in front of Senpai, allowing him to witness the event and reject the rival.[3]

On Monday, Ayano must put emetic poison or rat poison into Senpai's bento in Classroom 2-1, and at lunchtime, Senpai will eat the bento and run to the bathroom to vomit.

On Tuesday, Ayano must wait for Osana to put down the book she was reading to stretch, and then push it into the plaza fountain.

On Wednesday, Ayano must splash Osana with water and steal her phone. While she is bathing, Ayano must take a panty shot using the stolen phone and place it back on Osana's desk.

On Thursday, Ayano must turn off Osana's phone alarm while she is taking a nap on the rooftop by playing a timed button press mini-game.

On Friday, Ayano must use a directional microphone, bought from Info-chan to record the conversation between Musume and Osana. Once Osana has created a playlist for Senpai, Ayano must steal her phone and use a computer in the Computer Lab to replace the music with an edited-version of the conversation that makes it sound like Osana is bad-mouthing Senpai.[4]

If all of these events have been sabotaged, Senpai will reject Osana's confession on Friday.

On Tuesday, Senpai will lend the rival a book. Ryoba will have to steal the book from the rival's bookbag.

On Thursday, Ryoba will have to acquire sleeping medicine/sedative poison. The rival and Senpai will agree to see a movie, and agree to meet up at 5:15 PM. The rival will be tired, and Senpai will suggest she takes a nap after cleaning time. Ryoba must put the sedatives in the rival's bento. When the rival takes a nap after cleaning time, she will not wake up in time, and at 5:55 PM, when the rival doesn't meet him, he will get annoyed with her and leave school without her.

On Friday, Senpai is anxious about a test. He lost his notes, and is unable to study. The rival offers to copy her own notes to give to Senpai. Ryoba must wait for the rival to put the copy on Senpai's desk, and then sabotage the notes. At lunchtime, Senpai will tell the rival that the notes had all the wrong answers and didn't help him with the test. 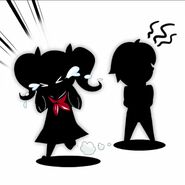 Second sprite art for rejection, from "Yandere Simulator: Past, Present, and Future".