Poisoning is a way to eliminate students or rivals without leaving any incriminating evidence.

On the schemes menu, the description is: "This scheme will end with your rival poisoned to death".

Lethal poison is located on the second floor in the eastern wing, in the Science Lab. Ayano can only successfully obtain poison by having at least a Rank 1 Chemistry stat. If this requirement is not fulfilled, she cannot take the poison from the shelf despite the player knowing its location. As a note, the location of the poison can be pinpointed by using Yandere Vision, with the bottle of poison circled in cyan.

Lethal poison can also be obtained from Info-chan by using the Drops Menu. It costs 50 Info Points regularly and costs 10 Info Points in Mission Mode.

Lethal poison is located on the second floor in the eastern wing, in the Science Lab. Usually, you need a higher chemistry stat, but in 1980s mode both emetic and lethal poison are sitting on the counter. You can get sleeping tablets at the convenience store in town, lockpicking the infirmary cabinet, or from the insane asylum. Headache poison is not obtainable, hence why you may lockpick the cabinet.

Ayano is able to poison most students, with the exceptions being Gema Taku and Miyuji Shan (unless in Mission Mode), The Bullies (unless the pool is closed), and The Student Council members (unless fired in Mission Mode).

During lunchtime, most students eat lunch in the hallways near their clubrooms, while others sit on the rooftop and cafeteria. After distracting students by means such as hiding and giggling or using a radio, thus luring students away from their lunches, Ayano will have the chance to poison their lunch.

Students will react to lethally poisoned victims according to their own Personas.

If Taro Yamada sees Osana Najimi lethally poisoned, he will try to wake her up to no avail. Afterwards, he will call the police, and then he will sob hysterically regarding Osana's death.

Teachers will react by contacting the paramedics as well as the police. The police timer will be triggered shortly afterwards. In future versions of the game, teachers may run to the nurse (Nasu Kankoshi/Muja Kina) instead.[1] When the paramedics and police arrive, they will be unable to revive the student but treat the death as a murder case. They will then try to search for any other corpses or weapons on school grounds. If neither are found, they will leave the school, having not enough evidence to perform an arrest. If weapons and corpses are found, the police will treat other disappearances as homicide cases and will begin to look for evidence regarding the deaths (along with the bodies, if the bloody weapons were what was found).

If Ayano hides a poisoned student's corpse but does not dispose of it by the end of the day, a teacher will find the body and react as described above. The School Atmosphere will then decrease by ten points.

The paramedics are unable to revive the victim. March 31st, 2016.

Emetic poison was implemented into the game in the January 3rd, 2017 Build. Rather than killing the victim, this poison instead makes the victim sick. When a student ingests emetic poison, they will run to a bathroom to throw up.

Emetic poison allows Ayano to sabotage rival events or put a rival in a more vulnerable position to be murdered (Ayano can drown a rival while she is hunched over the toilet).

It can be obtained via the drops menu, costing 25 Info Points. Rat poison, which has the same function as emetic poison, is located in the Gardening Club's shed. The player can also buy rat poison from Buraza Town's convenience store and bring it to school. 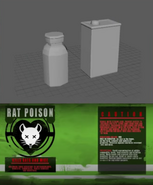