Phone Addict is one of the many personas that appear in Yandere Simulator.

If any other student has their phone out (with the exception of Cowards and Heroics, Student Council members, the delinquents, and Fureddo Jonzu (above 80% school atmosphere)) while witnessing a murder or seeing a corpse, they will automatically take on the Phone Addict persona, regardless of their previous persona. However, they will take twice as much time to text the police (This only happens between February 2nd, 2018 Build until Unknown Builds, because in unknown builds, if any students that have their phone out and without this persona, they react with their own persona instead of snapping a photo of Ayano commit murder. It is unknown if this bug or not).

If any characters with this persona that their phone has been stolen, then they witness Ayano commit murder, they will run away and call the police (As they react to murder with the Loner persona).

All the Bullies patrols all the floor. If the player talks to the bullies when the player's reputation is average, they will look annoyed with you. However, if your reputation is high, then the bullies will change behavior around you and they see you happily, because they actually care about making a good impression on you.

Gaming Club members (with the exception of Gema Taku), are also patrolling the school, hunting for a monster. The player can also defeat the monster. when the monster is defeated, the monster will spawn around the school and make the gaming club members will go to another place that has monsters. If the player talks to Gaming Club members, they will look annoyed with you, much like the Bullies. Even if the player's reputation is high, they will still look annoyed with you. This is probably because they have concentrated their routine. 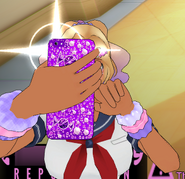 Kashiko taking a picture of an immoral action by the player. January 2nd, 2018.
Add a photo to this gallery

Retrieved from "https://yandere-simulator.fandom.com/wiki/Phone_Addict?oldid=490677"
Community content is available under CC-BY-SA unless otherwise noted.