The phone is a very important game mechanic in Yandere Simulator that allows Ayano Aishi to perform many actions.

Ayano's phone has multiple purposes, each represented by an app. In order to take it out, the player can either press the Enter key (PC) or the Start button (controller). Taking out the phone also pauses the game. Here, the player will find a menu that has several options: Photo Gallery, Tasks, Pass Time, Stats, Favors, Student Info, Load, Settings, Save, Music, Tutorials, Controls, Inventory, Quit, Reset Day, and Schedule. Ayano cannot use her phone when she's in Buraza Town or her basement. In 1980's mode, it is replaced with a notebook as phones haven't been invented yet.

This option will open up a gallery to view or delete all of the pictures that the player has saved on her phone. There is also the ability to use photos of Senpai to regain sanity. It is possible to add these photos to the corkboard in Ayano's bedroom; however, this serves no current purpose.

This option will show all the tasks Ayano has unlocked by speaking with a student. YandereDev wants every NPC to have at least one task.[1] Currently, individual tasks are available for Saki Miyu, Kokona Haruka, Musume Ronshaku, Pippi Osu, Ryuto Ippongo, Riku Soma, Gema Taku, Hazu Kashibuchi, Gita Yamahato, Kyuji Konagawa, Budo Masuta, and the delinquents, while every other student, excluding Student Council members, Raibaru Fumetsu and Geiju Tsuka, has a placeholder task. 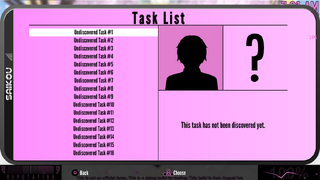 This option will make Ayano stare at her phone as time goes by at a faster rate (Ryoba will stare at her Senpai's photo in 1980s Mode). The player is able to select the hour or minute of which to pass time. This also will bring Ayano's sanity back to 100% when one hour passes. This will be completely unavailable when Ayano is in her house. Opening then closing the pause menu will stop time passing. 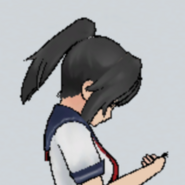 This option shows a screen of Ayano's stats, including her Biology, Chemistry, Psychology, and several others.

Through this app controlled by Info-chan, the player can see how many Info Points they've earned and spend them on various items, services, and bits of information.

This Service were replaced with "Ideas", and a lot of schemes are loaded up at the start of the game, as Info-Chan does not exist in 1980s Mode. However, some of the schemes must be unlocked by the serial killer at the town.

Whenever the player takes a picture of a student's face and sends it to Info-chan, they'll see a lot of useful information on that student here, like their reputation, persona, and level of strength.

These options are self-explanatory. A simple saving/loading system has been implemented but is subject to further improvement. In his "Yandere Simulator January 2019 Progress Report" video, YandereDev said that he will complete the Save and Load System after Osana Najimi has been implemented into the game and the game is no longer changing.

This option will allow the player to adjust a range of settings that will change visual aspects of the game.
The player can:

This option allows the player to change the game's background music.

This option allows the player to see the tutorials after the player receives a tutorial.

This option allows the player to see all the game's controls, just like the ones seen during the loading screen.

This option allows the player to see all the items they're currently holding, not including weapons, masks, or other large items that can't be concealed.

This option will take the player straight to the title screen, but it won't save the game.

This option will send the player back in time to 7:00 AM on the current day. You can't use this to reset the week, just the day you're on.

This option will show a grid of every important event during the week. These events usually take the form of an important conversation to listen to.

This option will allow the player to look through the skills that Ayano has obtained or learned throughout Yandere Simulator.
The stats are:

This option will allow Ayano to exchange panty shots for favors from Info-chan.

This option is one of several favors from Info-chan. In exchange for panty shots, Info-chan will do several tasks for Ayano.

Only seven services are available at this time.

This option is one of several favors from Info-chan. In exchange for panty shots, she will give specific instructions on how to eliminate each rival.

Info-chan will drop assorted items out her club room window for Ayano to use in exchange for panty shots.

In the September 20th, 2015 Build, the Student Info was implemented. Upon starting the game, only two profiles of students are visible: Info-chan and Senpai. The rest of the profiles are covered by question marks. Senpai's picture currently will not change, even if his appearance is customized. When taking a correct picture of someone, a question mark icon will appear on the top screen. If Ayano sends the photo to Info-chan, the student's information will appear on her phone. The player is able to look up a student's info at any time, even in Ayano's home. The Student Info will show others' crushes, reputation, self-defense, club, persona, and any additional info.

Dead students have a greyed out profile, students that Ayano is friends with have a smiley face icon in the top left corner, females that Ayano has taken a panty shot of will have a panty icon in the top right corner, and people who have been framed and put in jail have a greyed out profile with prison bars over their picture. The picture from Student Info can be selected to gossip about or distract a student, but only if a picture is taken of them prior.

Pressing - and + when the Student Info is in view will change their reputation. If their reputation reaches -150, they will commit suicide, but that has not been implemented yet.

Teachers and the Nurse can be found below all the students. 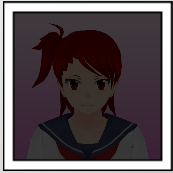 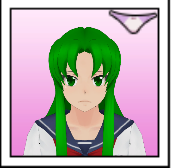 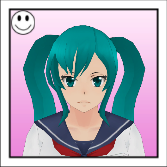 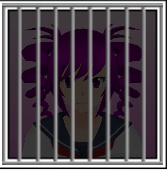 This was originally a bug that YandereDev decided to keep in the game. Taking out the phone while pressing the Left Alt key will make the camera detach itself from Ayano and stop following her around. This can be used for cinematic purposes and to get otherwise impossible angles for a video. YandereDev will not respond to any bug complaints about the mode because it was a bug in the first place.[2]

In addition to the pause menu, Ayano can also take pictures with her phone - right click (PC) or LT (controller) in order to start taking a picture. The player can use the scroll wheel (PC) to zoom in and out if Ayano is in the Photography Club. To take a picture, left-click (PC) or RT (controller). Once Ayano has taken a picture, she can decide whether to send it to Info-chan, save it to the photo gallery, or delete it. A box with crosses will indicate whether the picture needs to be taken again.

In October 8th, 2015 Build, Control will work for taking photos instead of just clicking.[3]

When aiming Ayano’s camera, she can switch to a “selfie” camera angle. The selfie angle allows Ayano to be more discreet when taking a photo because bystanders will assume that Ayano is taking a photo of herself, rather than their face or their panties. In the selfie angle, Ayano's goal is to take a photograph of something to the side of herself, rather than directly in the center of the screen. You can press a button to activate a little guide that shows Ayano where her target should be located on the screen.

The game can recognize five different types of pictures taken: ones of Senpai, face shots of NPCs, panty shots, corpses, and incriminating pictures.

The way to determine whether or not a picture is correctly identifiable is to see if the X is missing on one of the five icons on the HUD.

A red heart will pop up next to any pictures of Senpai when Ayano opens her photo gallery, reminding her that she can "use" them to regain sanity. The hearts will be gone once used.

Sending a 2nd picture of Senpai to Info-chan.

Sending a 3rd picture of Senpai to Info-chan.

Sending a 4th picture of Senpai to Info-chan.

Sending a 5th picture of Senpai to Info-chan.

Pictures of Other People

If Ayano aims her camera at people with certain personas, they will stand still and react according to their own persona. Loners, Cowards, and Fragile students will cover their faces, as they are shy. Heroes, Teacher's Pets, and teachers will give Ayano a skeptical look. Spiteful students will cover their face with one hand. Social Butterflies and Phone Addicts will strike a cute pose. If Ayano points the camera for too long, she will lose reputation points. 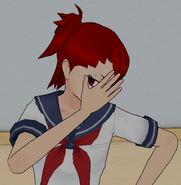 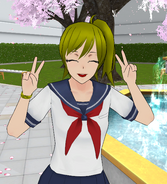 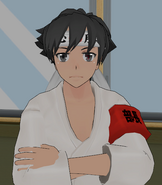 Taking panty shots will always activate the Visibly Lewd HUD, unless Ayano is in Selfie Mode. They can be sent to Info-chan in exchange for favors, although currently, she will only accept one panty shot per student. Successful panty shots are characterized by a markless white panty icon. In the full game, Info-chan's prices will be balanced based on the number of students, or Ayano will be able to take multiple panty shots of one girl if she is wearing different panties.[4] Ayano may also be able to take panty shots of herself in the future.[5]

In the future, sending nude photographs to Info-chan might work as well.[6]

If sent to Info-chan, she will say "Good work, but don't send me this stuff. I have no use for it."

On the HUD, pictures of corpses are characterized by a skull icon.

In the future, if the player has their phone out, nude students will react negatively.[7]

During the game, there will be several cutscenes that will take place via texting.

In the future, it is possible that all rivals will have their own phone. Ayano will be able to steal a rival's phone, and if it has some pictures, can try to use it against a rival. This was one of the original plans for the game.[8]

Another plan was to steal someone's phone and post lies on their Internet account, but the method is pretty complex.[9] Before the March 15, 2020 Build, the only phone that could be stolen is Kokona's. It could be used to frame her for taking panty shots.

As of March 15th, 2020 Build, the player would be able to steal any girl's phone, instead of stealing Kokona's phone.

Stealing Kokona's phone from her locker in the Shower Room. May 1st, 2016. 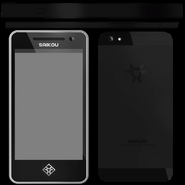 Texture of Ayano's phone from the game files. 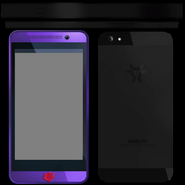 Texture of Kokona's phone from the game files. 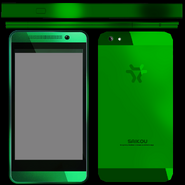 Texture of Midori's phone from the game files. 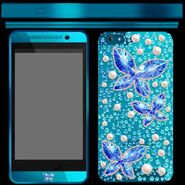 Texture of Musume's phone from the game files. 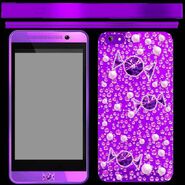 Texture of Kashiko's phone from the game files. 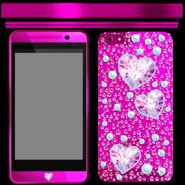 Texture of Kokoro's phone from the game files. 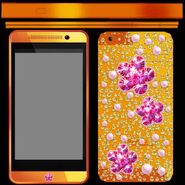 Texture of Hana's phone from the game files. 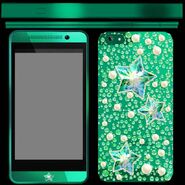 Texture of Hoshiko's phone from the game files.