The Phantom Girl[2] is one of the first Easter Eggs in Yandere Simulator. Her identity will become very obvious at some point in the future.[3]

She can only be seen if the player takes a photo in the girls' bathroom on the third floor, in the center of the bathroom. On the November 15th, 2015 Build, she was in the girls' bathroom on the right side of the school. No matter where Ayano Aishi is, the Phantom Girl will always be looking at her. YandereDev has stated that she was killed by a knife stab[4] from Ryoba Aishi around April of 1989.[5]

As of the June 16th, 2015 Build, the Phantom Girl is now located in the girls' bathroom on the third floor instead of her former location, which was under the sakura tree behind the school. The former area was just used for testing purpses, since the bathroom wasn't programmed before.[6]

There might be an event where a member of the Occult Club can interact with the Phantom Girl.[2]

To avoid a time paradox, the Phantom Girl may be killed in the intro animation for 1980s Mode.[7]

When she was first implemented, she was translucent, had no pupils, and she also had the same hairstyle as Ayano. She would always wear the second female uniform, regardless of customization. When the player touched the Phantom Girl, their uniform would change to black and red. This ended up getting removed, however, due to being reported countless times as a bug.

As of the September 23rd, 2016 Build, when shown in photographs, she is no longer translucent. She has pale grey skin, a ripped version of the default uniform, short brown bobbed hair and wears a hitaikakushi on her head. She has a completely black face aside from one glowing yellow eye. She also has 2 blue hitodama on either side of her.

A flower plucked far too soon.

Phantom girl was probably born somewhere in the 1972, since she was around 17 in 1989. Not much is known about her early life, except that in April of 1988, when she was 16, she began attending Akademi High School. There, she developed a crush on her upperclassman.

However, her life ended in April of 1989, when at the beginning of her second year in high school, she was murdered by her classmate, who had a crush on the same upperclassman as she did. Her body was eventually discovered, but her murderer was never caught.

Since then to this day, for over three decades, her ghost haunts the place in which she died - the girl's bathroom on the third floor.

Some of the information here may be outdated, as many things have changed.

An early blog post on YandereDev's WordPress, named "Halloween and DLC" featured some ideas for the game, which included the Phantom Girl.

"As it was told, Yandere-chan's mother was a yandere girl in high school and killed a female student in one of the school’s bathrooms. The player can actually see the ghost of the girl that Yandere-chan’s mother killed by walking into the bathroom and taking a picture. But what if that ghost had a chance to take revenge on Yandere-chan’s mother, by thwarting her daughter? The ghost might decide to channel all of her energy into gaining a physical form, and romancing Senpai before Yandere-chan can confess to him. Yandere-chan would not be able to “kill” the ghost, and would have to expel her using unconventional methods. Perhaps the Occult Club would hold the key to getting rid of her, The Ghost may also be one of the rivals." 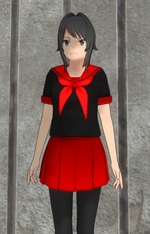 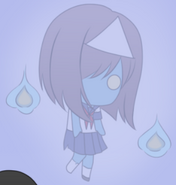 The Phantom Girl in the 4th Anniversary blog post.

Phantom Girl in Osana Progress and Yakuza Thoughts.
Add a photo to this gallery

The Phantom Girl before the September 23rd, 2016 Build.

The Phantom Girl when she was behind the tree.

The Phantom Girl in the bathroom in an old build.
Add a photo to this gallery

Retrieved from "https://yandere-simulator.fandom.com/wiki/Phantom_Girl?oldid=499355"
Community content is available under CC-BY-SA unless otherwise noted.