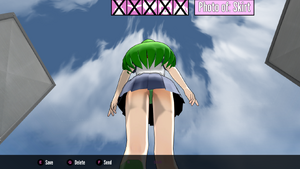 Panty shots are the currency that Ayano Aishi can exchange with Info-chan. They are completely optional[1] and have not been fully implemented yet.

Info-chan will exchange Panty Shot Favors with Ayano if she has enough panty shots. Ayano can send photos of girls' panties to Info-chan by going prone behind them and taking pictures with her phone. Once all the conditions are fulfilled, the Visibly Lewd warning will appear at the top of the screen, and she will only get a few moments before she is caught.

If Senpai sees Ayano taking panty shots, he will become disgusted, resulting in a Game Over. If a teacher sees Ayano, she will be sent to the Guidance Counselor.

Most panty shots are worth five credits toward Panty Shot Favors.

Nasu Kankoshi's, the Student Council's, and the Bullies' panty shots are worth 10 credits.

If Ayano sends Info-chan a panty shot of the same girl twice, it will not count as another credit toward Panty Shot Favors. In the final version of the game, either Ayano can take multiple panty shots of the same girl, as long as they are wearing a different pair of panties[2] or Info-chan's prices will be more balanced.[3] 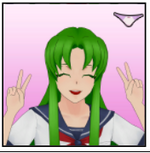 When Ayano has taken a panty shot of a girl, a panty icon will display on their student profile picture.

In the future, Ayano may be able to take panty shots of unsuspecting teachers if their final character models wear skirts.[6]

After collecting enough panty shots, the player can give them to Info-chan in exchange for services, drops, or schemes.

In order to get a rival expelled, Ayano can steal a rival's phone from the Shower Room while they are bathing and use it to take a panty shot. She can then report this to the Guidance Counselor.

Retrieved from "https://yandere-simulator.fandom.com/wiki/Panty_Shots?oldid=491953"
Community content is available under CC-BY-SA unless otherwise noted.