Otohiko Meichi is one of the male students who currently attends Akademi High School.

Otohiko wears the default male school uniform unless customized by the player.

Otohiko has long salmon-pink hair. He has a long bang coming down in the middle of his forehead, covering the space between his eyes. Another strand of hair sweeps to the left on the top of his head. His hair comes down to the side of his head and stops slightly above his ears. His eyes are bright peach.

"A frail and sickly boy. Because of his poor health, he can often be found in the school infirmary. Usually oversleeps and arrives at school later than any other student. Sometimes ridiculed for his unusually feminine mannerisms. Known to be extraordinarily clumsy."

Among the personas currently implemented in the game, Otohiko is a Coward. If he sees a corpse, he will run away from school and call the police. If he witnesses a murder, he will start begging Ayano to spare his life in exchange for his silence. Because he is a coward, he will hide his face if Ayano aims her phone at him. He cannot participate in physical fights against murderers.

According to his student profile, he is quite sickly and would always oversleep, causing him to arrive at school late. He is also sometimes ridiculed/bullied for his feminine mannerism and is known to be very clumsy. He is mainly found in the infirmary resting.

At 7:55 AM, Otohiko enters the school grounds running, significantly later than other students, and tripping at the school gate. In Mission Mode, after the Delinquents comes to school, Otohiko will arrive at 7:04 AM. He walks to his locker at 8:00 AM and changes from his outdoor shoes to his indoor shoes.

Otohiko walks back to class again at 1:30 PM and participates in cleaning time between 3:30 PM and 4:00 PM. Afterward, he heads to his locker and changes from his indoor shoes to his outdoor shoes, lingers there until 3:50 PM, then walks home.

The topics towards Otohiko are (Negative/Positive/Neutral) as follows: 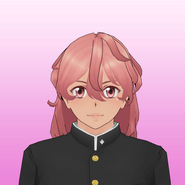 Retrieved from "https://yandere-simulator.fandom.com/wiki/Otohiko_Meichi?oldid=498355"
Community content is available under CC-BY-SA unless otherwise noted.