Oka Ruto is one of the female students who will attend Akademi and the fourth upcoming rival in Yandere Simulator.[2]

She stars as the main antagonist of Yanderetale.

Oka will not be present at school for the first three weeks of the game. While she is absent, Shin Higaku will be her substitute, and he will allow the player to join the club and participate in club activities while Oka is absent.

Until the August 18th 2018 Build, the player was able to see Oka walking around, but her current features and routine were temporary and will change in the future.

Oka wears the default female school uniform, unless customized by the player.

Oka's first hairstyle in the November 15th, 2015 Build was exactly the same as Sakyu Basu's, except with hair covering her left eye. It was dark purple.

As of the December 2nd, 2015 Build, she has messy, shoulder-length hair that is dark navy blue. She has a fringe hanging down the middle of her face, flowing across her right cheek. Her eyes are light purple. She has large black rings around her eyes due to lack of sleep. Her lips and skin are pale, and the upper half of her face is slightly shadowed. Since she is a club president, she wears a "Red Armband of Leadership" on her left arm. Her bust size is 1.

Like all Occult Club members, Oka wears a black choker. However, instead of having a crescent moon on it, it has a silver spider. If the Occult Club disbands, she will not wear the choker anymore.

She walks very slow, with her hands clasped together. Oka is always looking shyly at the ground. As of the June 1st, 2016 Build, Oka wears light blue-grey thigh-high spiderweb stockings and fingerless gloves. Her panties are also black. In the future, Oka will have very pale skin.[4] According to her full body reference, it appears that in the future, Oka will have a pentagram drawn on her armband.

In Oka's original design, she was supposed to wear a turtleneck underneath a dark blue blazer. It was scrapped because Oka's model could not support two models of clothing at the same time. As of the April 10th, 2017 Build, Oka can wear this outfit by pressing the A key in the easter egg menu.

YandereDev stated that she may be the shortest rival.[5]

"Oka is the president of the school's occult club. She is completely convinced that ghosts, demons, and black magic really exist, and wants to dedicate her life to proving that these things are real.

Oka is absent for school during the first three weeks of gameplay for mysterious reasons. As soon as she returns to school, she is immediately smitten by Senpai. Due to the fact that she falls for him in an extremely short span of time, she believes that there must be something supernatural about him, and begins studying him intently.

She is an awkward girl who is regarded as 'creepy' by the majority of the school, but she is actually quite harmless, and some people even find her to be endearing, as she is quiet and thoughtful. Perhaps Senpai will think that there is something charming about her unusual nature..."[6]

Oka is a stalker, but not a yandere, as she is too shy to harm others.[7] Her mannerisms are meant to make her look shy, timid, and socially awkward.[8] She has been obsessed with anything paranormal since early childhood.[9]

Among the personas currently implemented in the game, she is a Coward. If Oka sees a corpse, she will flee from school and call the police. If she witnesses a murder she will start begging the player to spare her life in exchange for her silence. She cannot participate in physical fights against murderers. It is unknown if she will be given a different personality later on in the game, due to the fact that some rivals may have the Lovestruck persona.[10] Because she is shy, she will hide her face if the player aims their phone at her.

Oka can be seen walking around and looking at the scenery in the street. She can also be seen looking towards the ocean on the edge of the town.

In her first appearance at school from the game, Oka would enter school grounds at 7:05 A.M. She would then walk to her locker at 7:10 A.M. and change from her outdoor shoes to her indoor shoes. At 7:15 A.M., she would walk to the rooftop and stalk the Basu sisters in search of proof that they are actually supernatural beings, as stated by her Student Profile. If both sisters were dead, then she would stay in the Occult Club room until class began instead.

At 1:00 P.M., she leaves class to go to the Occult Club. She would walk back to class again at 1:30 P.M. and participate in cleaning time between 3:30 P.M. and 4:00 P.M. She would then head to her locker and linger there until 3:50 P.M., where she would head to the Occult Club again and stay there until the end of the day. If Ayano Aishi joined in on club activities, Oka would unsuccessfully try to summon a demon with other members of the club from 5:30 P.M. to 6:00 P.M.

In the case of the Occult Club’s disbandment, she would socialize with the other remaining former members outside of the club when she would normally attend it (1:00 P.M. and 3:30 P.M.).

The topics towards Oka are (Negative/Positive/Neutral) as follows:

She is the founder and president of the Occult Club.[11] As with other leaders, the player will have to talk with her to join. If she dies, or less than five members of the club remain, the club shuts down. Any club members who witness the player's crimes will report to her, and Ayano will be either kicked out or unable to join the club. In the future, if the club has disbanded before her designated week arrives, there will be a short cut scene about this, and she will express some very sad feelings.[12]

She stalks Sakyu Basu and Inkyu Basu daily, in a futile search for evidence that they are supernatural beings. This is stated in Oka's Student Profile.

She truly believes that they are supernatural beings, and dismisses any evidence that suggests otherwise.[13]

Since she is a future rival, she will have a crush on him and will confess to him on Friday. Oka is a very superstitious person, which might play a role in how she develops a crush on Senpai. Since she is very strange, the way they will meet will be comical.[14]

If she entered a relationship with Senpai, he'd become a paranormal investigator.[15]

Oka trusts him to operate the club when she is not present, according to his Student Profile.

In the future, Ayano can matchmake Oka with her suitor.

It is possible that one Oka's eliminations will involve Sumire.

Some students gossip about the Occult Club to say what freaks they are. It is also rumored that Oka does self-harm.

Oka in The Rival Introduction Video.

A full body illustration of Oka.

Oka's original design. Seen here in the comments by looking for "Occult Club".

An old illustration of Oka.

Another old illustration of Oka.

Oka's silhouette from "Yandere Simulator: Past, Present, and Future".

Her silhouette from "How Sanity Affects Murder in Yandere Simulator".

An illustration of Oka by kjech.

Oka in What's Taking So Long?! Part 1: The Problems.

An illustration of Oka from the the third anniversary blogpost. 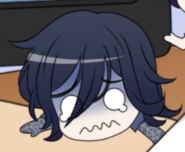 A male version of Oka from the Yandere Simulator Male Rival Introduction Video.

An illustration of Oka from the 5th Anniversary blog post

An illustration of Oka as a Sith Lord by Mulberry. 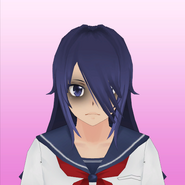 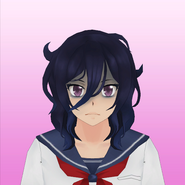 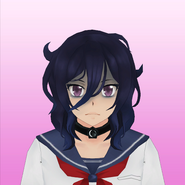 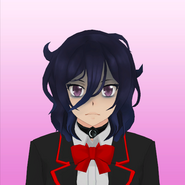 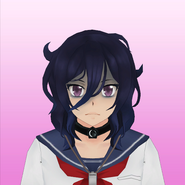 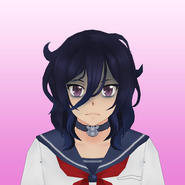 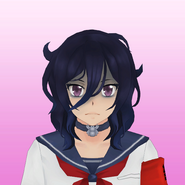 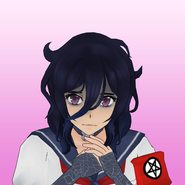 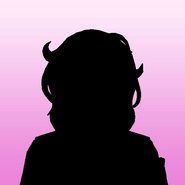 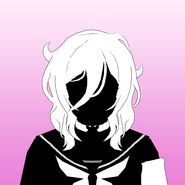 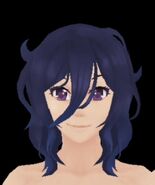 One of the models that Druelbozo has made using Oka's hair.

A reference image of Oka based on Aea's concept art.

Oka in the Yanderetale intro cutscene.

Oka in the town.

Oka in the Thanks For Playing cutscene at the end of the demo.