View source
watch 02:17
New Pokemon Games - The Loop
Do you like this video?
Play Sound
This page is for the version of Hanako Yamada in Mission Mode. For her 202X Mode counterpart, see Hanako Yamada.

Nemesis (a.k.a Hanako Yamada) is a student who is exclusive to Mission Mode and the Horror Prototype Easter Egg.

She presents a "lethal enemy" to Ayano.[1]

"'Mission Mode' takes place in a separate timeline from the main game. In Mission Mode, you play as a young female assassin who has been contracted to kill a student at school. However, you aren't the only killer at school...

Nemesis is a character who attempts to hunt and kill you during Mission Mode. It is impossible to kill her with a frontal attack; if you want to kill her, you need to approach her from behind. If you run, she will hear your footsteps, so you must be very careful and quiet if you wish to sneak up on her. Depending on what difficulty level you have chosen, Nemesis might be invincible, and might also be disguised as one of the female students.

So, just who is Nemesis? Is she a bodyguard hired to protect the student that you're after? Is she a vigilante who has made it her mission to stop you? Is she another assassin who wants to remove her competition? Or, true to her namesake - the Greek goddess of retribution - is she here to take revenge on the protagonist for the sins of her past? For now, it's a complete mystery..."[2]

As of August 1st, 2019, it was revealed that Nemesis is Taro Yamada's younger sister, Hanako Yamada, in the Mission Mode timeline. In this timeline, Taro was Ayano Aishi's first target she assassinated, and Hanako swore to punish her brother's killer.[3]

She wears the default female school uniform for Mission Mode, which is the fifth female uniform available.

Nemesis has pale skin, rounded straight black hair, and thin red eyes. Her fists are always clenched and she wears black gloves. She used to have spiky wavy hair, similar to Oka Ruto's hair, which changed into a bowl haircut. This is her third hair style.

If the player chooses to have Nemesis disguised, she will take on the appearance of a random, non-Club Leader female student while entering Akademi.

YandereDev pictures Nemesis wearing a very grim and serious facial expression at all times, and being very emotionless and solemn. In almost any situation, she would have a deadpan look on her face. However, the moment she goes in for the kill, her expression may change to reveal her true nature.[1]

She only appears if enabled in Mission Mode. At 7:00 AM, Nemesis will spawn randomly inside the school and will start wandering around the school corridors and courtyard, searching endlessly for Ayano. If disguised, she will enter the school grounds as a female student, but will turn hostile after changing her shoes at the lockers.

When noticing Ayano, she will break her routine and start following Ayano in an attempt to kill her with a knife. If aggressive, Nemesis will always run to Ayano every time she sees her. Her running speed is faster than most students, although Ayano can still outrun her. Since Nemesis runs very quickly, it is quite difficult to make Nemesis lose track of the other.

She does not go to class, since she patrols the school in search of any suspicious student that may be skipping classes to plot some form of murder.

If the player opens up the Horror Prototype by using "F2" in the Easter Egg menu, the school will be set at the lowest atmosphere. Nemesis, like in Mission Mode, will spawn randomly in the school, looking for Ayano. She will not be disguised as a female student.

Old illustration of Nemesis with her original hairstyle. 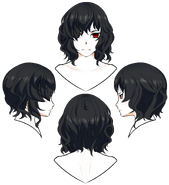 An illustration of Nemesis rotation by Mulberry.

New hairstyles for Nemesis from the official blog, option 3 was chosen.

Nemesis in What's Taking So Long?! Part 1: The Problems.

An illustration of Nemesis from the third anniversary blogpost. 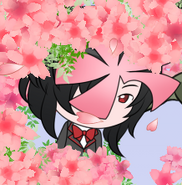 An illustration of Nemesis from the fourth anniversary blogpost.

An illustration of Nemesis by Mulberry. 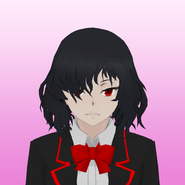 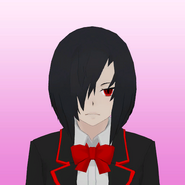 Nemesis on the Mission Mode menu.