Nasu Kankoshi is an NPC and an Akademi High School faculty member. She is the school's full-time nurse.

Nasu has short, dark brown hair and eyes, and she wears a white nurse uniform with pink accents, including a nurse's hat and coat with pink crosses. Underneath her uniform is a dark pink top and light pink stockings, and she wears white flats.

"After an incident in 1989, the Japanese public began to associate Akademi High with the thought of murder, and enrollment rates dropped sharply.

In order to restore the school's reputation as a safe place for higher learning, the Headmaster mandated that all faculty members take courses in self-defense.

As a result, every staff member at Akademi High - from the teachers to the nurses to the guidance counselor - is capable of defending themselves against a direct assault from an armed attacker."[1]

Among the personas currently implemented in the game, she is Strict. She will look at Ayano Aishi suspiciously if she aims her phone at her.

If she witnesses Ayano commit homicide, she will apprehend her. If Ayano's Physical Education stat is at least 1, she will enter a struggle minigame with Nasu, allowing her to fight back.

If Nasu catches Ayano misbehaving, she will send her to the guidance counselor.

Nasu walks around the infirmary all day. If a student is afflicted with the Headache Poison, they will run to the infirmary and ask Nasu for pain medication. She will walk over to the medicine cabinet and unlock it, giving the player an opportunity to steal the syringe and tranquilizer.

The syringe and the tranquilizer are kept in the infirmary, which are needed for kidnapping. It is difficult to obtain these because Nasu keeps them in a locked cabinet. To get inside the cabinet, Ayano will have to poison a student's food and give them a headache, which will cause Nasu to unlock the cabinet to get some medicine. After that, Ayano can acquire the tranquilizer.

The topics Nasu feels Negative/Positive/Neutral towards are as follows:

An illustration of Nasu from the 5th Anniversary blog post 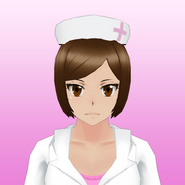 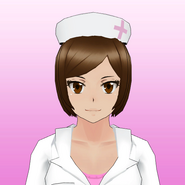 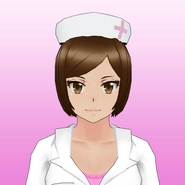 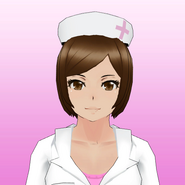 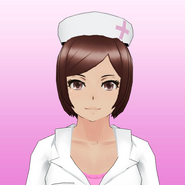 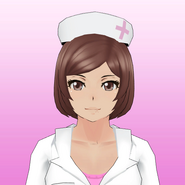 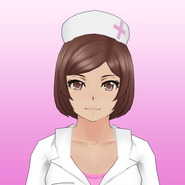 Nasu in the infirmary. 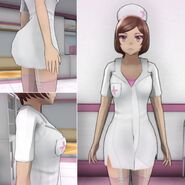