Muja Kina is the sixth upcoming rival in Yandere Simulator. She will be the substitute nurse for Nasu Kankoshi, the official nurse, who will be taking a vacation that week.

Once she is fully implemented, the player will need to sneak past her to access the tranquilizer and the syringe. YandereDev has stated that certain medicines will be kept in a locked container hiding somewhere in the office in the future. It can only be opened with a key, which the nurse will hide in a different spot each week.[2]

She has fair skin, light pink hair, and amethyst colored eyes. She wears a short-sleeved white nurse uniform with a low collar and a nurse's cap. She also wears light pink stockings with a white garter belt and white flat heels.

"Muja is a young nurse who desires nothing more than to take care of other people...although she usually ends up causing more problems than she solves due to her air-headed, clumsy nature.

Muja will be serving as a substitute for the school's usual nurse, who isn't available during the sixth week of gameplay. She will become fond of Senpai very quickly, during a point in time when he definitely needs someone taking care of his health.

Her intelligence is not her strong point, but she is a very sweet and caring person, and it's very easy to see how any schoolboy might develop a crush on her - including Senpai..."[3]

Muja is meant to be pure and innocent.[4] She is probably the only Faculty member who is incapable of self-defense.[5] She is expected by the other Faculty members to act well-trained and brave. However, she does not fit for that kind of person due to her clumsy personality. She is somewhat shy and awkward. She does not have a crush on Senpai, but she views him as a very, very close and warm friend. In the future, Senpai will probably have a crush on her.

Though it is currently unknown, YandereDev has said that Muja's routine will put her in close proximity to Senpai and other people, including students and staff.[6] It is presumed that her routine will be similar to the regular nurse, but nothing is confirmed.

The topics towards Muja Kina is Negative/Neutral/Positive follows:

In the final game, Senpai will become sick for the one week while Muja Kina is at the school, substituting for Nasu Kankoshi. He will visit her once per day.[7] Senpai, on that note, is attracted to sexually attractive nurses,[8] so their relationship might grow as a result of these interactions.

If she entered a relationship with Senpai, he will most likely pursue a career in the healthcare industry.[9]

In the future, Ayano can matchmake Muja with her own suitor. YandereDev is unsure if she'd be matched with a student.[10]

An illustration of Muja.

An old illustration of Muja.

Another old illustration of Muja.

A silhouette of Muja, shown in "Yandere Simulator: Past, Present, and Future".

A silhouette of Muja from "How Sanity Affects Murder in Yandere Simulator".

An illustration of Muja by kjech.

An illustration of Muja as a student by Mulberry.

A male version of Muja from the Yandere Simulator Male Rival Introduction Video.

An illustration of Muja eating with some of the other faculty members by kjech.

An illustration of Muja from the 5th Anniversary blog post 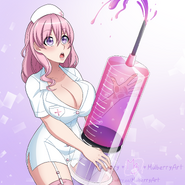 Another illustration art of Muja by Mulberry.
Add a photo to this gallery 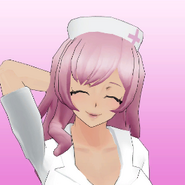 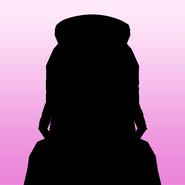 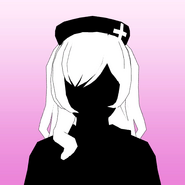 A reference image of Muja by Druelbozo.

The nurse that resembled Muja in the Infirmary. July 25th, 2016.

Muja in the Thanks For Playing cutscene at the end of the demo.
Add a photo to this gallery

Retrieved from "https://yandere-simulator.fandom.com/wiki/Muja_Kina?oldid=502428"
Community content is available under CC-BY-SA unless otherwise noted.