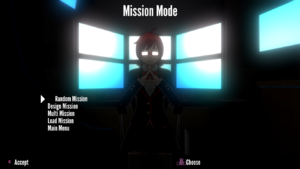 Mission Mode is a mode in Yandere Simulator.

The mode features a storyline that is in a separate reality from the main '202X Mode' in which Ayano plays as a 'killer for hire' employed by Info-chan, who specifically targets students of Akademi.

This mode is accessed through the game's main menu.

In this mode, Ayano will be given a random student to kill. When using Yandere Vision, Ayano's target will be highlighted in red. Depending on the difficulty level, there will be other requirements that she will have to fulfill, such as killing the student with a particular weapon.

The player's objectives for the mission can be seen at any time when the game is paused. Once Ayano has completed all of her objectives, she can exit the school via a portal by the entrance.

If enabled, security cameras and metal detectors will appear in school. Being seen by a camera while acting suspiciously, or brandishing a metal weapon while passing through a metal detector, will cause Ayano to fail the mission. The player must be careful to avoid the cameras, and the metal detectors can be disabled with a screwdriver.

When starting this mode, the player can change the mission's difficulty level. There are 10 levels, and each level will add one unique step that Ayano will have to complete to complete the mission. If Ayano does not complete all of the steps given, she will fail the mission.

If the player goes to the 'Design Mission' option on the Mission Mode menu, they will be able to design their own missions. Players are able to choose factors such as the difficulty, objectives and their target.

In addition to this, players are also able to create a unique 19 digit code for their missions, meaning that the missions can be shared. To access it, the player must go to the 'Load' option on the main menu and type the code, known as a Mission ID, into the box.

The code for the custom mission above.

The box where the code can be entered.

If enabled, Nemesis will appear on school grounds and will actively try to hunt and kill Ayano.

In this mode, the player would be able to kill at most 10 students in missions.

Failing to follow the objectives of the elimination method in Multi Missions will result in the multi-mission failed.

YandereDev has confirmed on his Patreon that there will be something similar to Mission Mode for 1980s Mode, though he hasn't disclosed any details yet.[1] 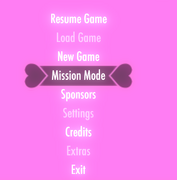 Mission Mode on the main menu.

The safe inside the Headmaster's Office. December 17th, 2016.