Mida Rana is the seventh upcoming rival in Yandere Simulator.[2]

Mida has dark brown hair tied up in a ponytail and brown eyes. She has a beauty mark on the bottom left side of her face and red lipstick. She wears a tight black suit jacket with a white dress shirt underneath and a red bra slightly showing. She also wears a tight, short, scarlet skirt, black thigh-length stockings with a black garter belt attached, and red high heels.

"Mida is a substitute teacher who absolutely loves her job; there is nothing that she enjoys more than having dozens of eyes all directed towards her...especially if those eyes belong to teenage boys.

Mida will appear at school in the seventh week of gameplay in order to fill in for an unavailable teacher. She will quickly begin hunting for new 'prey', and Senpai will catch her attention.

Her hobby is seducing schoolboys, and so far, no man has ever been able to resist her charms. If she decides that she wants someone, they have no hope of escape. Senpai won't be able to escape her clutches unless someone takes drastic measures..."

As she is a part of the Faculty, she will have the Strict persona and will have extensive self-defense training.

Her defining character trait will be intentional sexual innuendos[2], as she will be sultry and seductive[3].

Though it is unknown at the moment, YandereDev has said that her routine will put her in close proximity to Senpai or other students.[4]It is presumed it will be the same as a regular teacher. In the future, she can be called upon by Teacher's Pets if they witness a murder.

The topics Mida feels Negative/Positive/Neutral towards are as follows:

As she is a rival in the future, she will have a crush on Senpai. She goes after him because she is finally ready to "settle down".[5]

Senpai entering a relationship with Mida would be very complicated. He would eventually get a job in an academic institution.[6]

The player will be able to matchmake her with an unknown student.[7]

An illustration of Mida.

An old illustration of Mida.

An illustration of Mida Rana by kjech.

Mida's silhouette from "Yandere Simulator: Past, Present, and Future".

A preview of Mida from "September Progress Report".

A silhouette of Mida.

A male version of Mida from the Yandere Simulator Male Rival Introduction Video.

An illustration of Mida eating with some of the other faculty members by kjech.

An illustration of Mida from the 5th Anniversary blog post 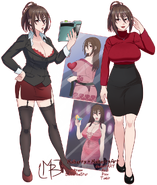 An illustration of Mida Rana by Mulberry. 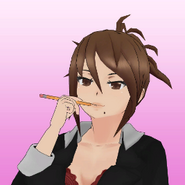 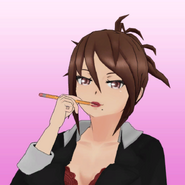 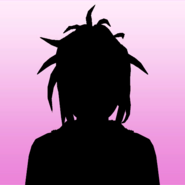 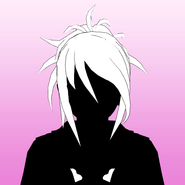 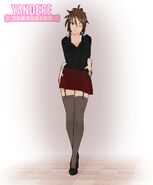 A reference image of Mida by Druelbozo.

Mida in the Thanks For Playing cutscene at the end of the demo.