Mei Mio, whose real name is Mei Kamio, is one of the female students who attended Akademi in 1980s Mode.

Before she was reintroduced in 1980s Mode, she was one of the female students who attended Akademi in 202X Mode. She appeared in Buraza Town as a background character, along with the other removed students.

She has blue hair that's tied into a small bun. Her bangs are separated into three locks - one reaching the collar of her shirt on her right side, one nearly reach her lips in the center of her face, and one that's tucked behind her ear on her left side. She has a tall ahoge on the top of her head that curls at the end. She has blue eyes and wears blue glasses as well.

Mei wore the default school uniform unless customized by the player.

Before the February 8th, 2016 Build, she had blue colored hair worn in tritails, one on each side of her head and one in the back. She also had bangs in the same style as the default Ayano Aishi. Her eyes were cobalt blue as well.

Before the May 2nd, 2016 Build, she had cobalt blue hair pulled back into a ponytail with strands of hair that hang to the right, some hair around her neck that reaches her shoulders, and bangs that curl inwards to her cheeks and dark blue eyes. Her bust size is 1.4. She wears blue framed reading glasses.

Before the December 18th, 2017 Build, she had blue hair tied in a small bun. Her bangs were longer on her right side, and she had an ahoge on the top of her head. She had a bang going down the middle of her face and another smaller one to the right of the larger bang.

As of the January 16th, 2017 Build, she wore a blue friendship bracelet on her right wrist.

As of the February 2nd, 2017 Build, she wore blue stockings and panties.

As of the December 18th, 2017 Build, she had blue hair tied back into tritails on the back of her head. Her bangs were parted to the right, with a blue hair clip partially holding them back.

As of the January 13th, 2018 Build, Mei's bun was restored due to negative feedback from fans.

"A smart and dependable girl. Seems to know the answer to almost any question. Studies very often, but always makes time for her friends."

Among the personas that are currently implemented in the game, Mei is a Teacher's Pet. If she sees a corpse or witnesses a murder, she will run and report the corpse to a teacher, unless another Teacher's Pet already has. She cannot participate in physical fights against murderers.

During Week 10, Mei helps with Sonoko Sakanoue's investigation and uses the Sleuth persona. She will take a photo of Ryoba Aishi committing murder or of the corpse and run to show it to the police, who are just outside the school. This will cause an instant Game Over if the photo is of Ryoba committing murder, as Ryoba will have been arrested.

In her reference photo, she was shown to be studious, as she was seen studying at a desk.

Mei changes her shoes at 7:00 AM, then hangs out in the school plaza with the rest of the rainbow girls and Kaguya Wakaizumi. She goes to class in Classroom 1-2.

At 1:00 PM, she then heads to the rooftop, along with the rest of the rainbow students and Kaguya, to eat lunch. Mei heads back to class at 1:25 PM, then participates in Cleaning Time at 3:30 PM, cleaning Classroom 2-2.

At 4:00 PM, she lastly heads to her locker, changes her shoes, then walks out of school with the rest of the rainbow students.

During Week 3 and Week 7, Mei sits in the library and reads a book so that there will be witnesses around Honami Hodoshima. (And later Teiko Nabatasai).

Mei changes her shoes at 7:00 AM, then goes straight to the library and reads along with the other rainbow girls. At 8:00 AM, she then goes to class in Classroom 1-2.

At 1:00 PM, she then heads to the rooftop, along with the rest of the rainbow students and Kaguya, to eat lunch. Mei heads back to class at 1:25 PM, then participates in Cleaning Time at 3:30 PM, cleaning Classroom 2-2.

During Week 8, Mei talks with Komako Funakoshi in the plaza, most likely because she wants to be more like her.

At 7:00 AM, Mei enters the school grounds and immediately investigates various students, including Ryoba.

At 8:00 AM, she walks to Classroom 1-2 and sits at her desk. She starts her morning classes at 8:30 AM and leaves to once again investigate various students at 1:00 PM.

At 7:05 AM, Mei entered the school grounds with her friends. She walked to her locker at 7:10 AM and changed her shoes. At 7:15 AM, she walked into the plaza, to the left side of the fountain, and gossiped with Yui Rio, Yuna Hina, Koharu Hinata, Saki Miyu, and Kokona Haruka. She would also gossip with Musume Ronshaku before the rest of the bullies were implemented.

Mei walked back to class again at 1:30 PM and participates in cleaning time between 3:30 PM and 4:00 PM. Afterward, she headed to the Cooking Club and stayed there until 5:00 PM. She then headed to her locker and changed from her indoor shoes to her outdoor shoes, then she lingered there until 5:15 PM when she walked home.

The topics towards Mei are (Negative/Positive/Neutral) as follows:

Mei walking in the background of "Raising the Strength Stat".

Mei in Bucket Based Murder in Yandere Simulator.

An illustration of Mei with the rainbow six shown in Mid-January Progress Report.

An illustration of Mei from the the third anniversary blogpost. 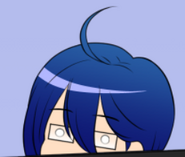 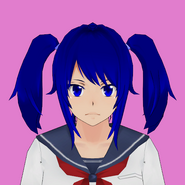 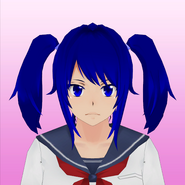 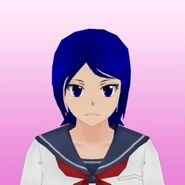 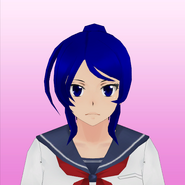 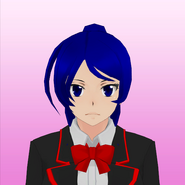 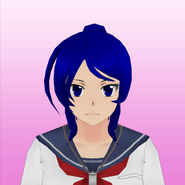 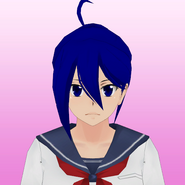 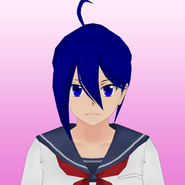 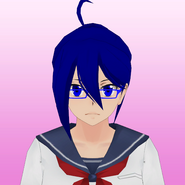 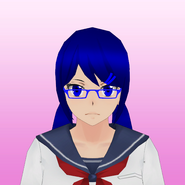 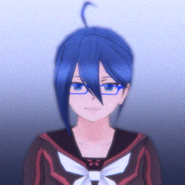 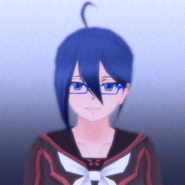 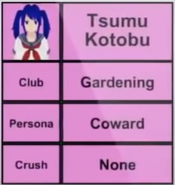 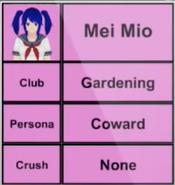 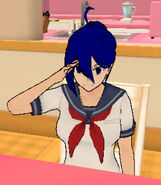 A full body reference of Mei with the rainbow six.

Another reference of Mei.

Another reference of Mei with Yui Rio. 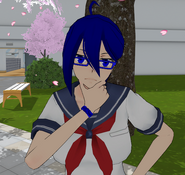 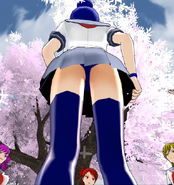