Megami Saikou is the tenth upcoming rival in Yandere Simulator[3], a female student and the President of the Student Council who will attend Akademi High School.

She is the most popular girl in school.[4] She will be absent for nine weeks because of "family business".

She was first shown in the "December 2015 Progress Update" video. Soon after, she reappeared in a video shown by a volunteer named "YandereAni"[5] and was implemented into the game in the January 1st, 2016 Build.

Megami has fair skin, rosy cheeks, silver eyes, and long silver hair down to her thighs with fringed bangs and a protruding ahoge.

Megami wears the school council uniform, with black stockings, gloves and a choker with red stitching and bows. She wears the "Red Armband of Leadership" on her left arm reading 生徒会, meaning Student Council written in kanji.

She previously appeared as her old appearance in a video on a Saikou laptop, that currently resides in the Student Council Room, in which she was in black and white instead of her current appearance.

"Megami is the heiress to Saikou Corp, the most powerful business conglomerate in Japan. She is impossibly wealthy, a certified genius, has extensive self-defense training, has excelled at everything she has ever attempted to do in her entire life, and has been trained to possess all of the qualities of a perfect leader, to prepare her for the day when she will inherit her father's company. She is also the most beautiful girl in school, the most popular girl in school, and the student council president.

Megami has been absent from school for nine weeks under mysterious circumstances that she refuses to disclose. She has still managed to keep up with her schoolwork by attending class through a laptop, and has also been able to manage the school's student council by attending meetings via video call. She is noticeably upset about this; she strongly believes that she should be attending school like a normal student, and is resentful of her current situation, although she is not at liberty to explain the reasons for absence.

Megami, unlike all other characters, is fully aware of the fact that there is a dangerous person on school grounds. Once she arrives at school, she will do absolutely everything in her power to protect the school's population - that includes installing security cameras, hiring security guards, and instating a zero-tolerance policy for suspicious behavior. Megami clearly has some very important information that would cause her to go to such extreme lengths...but what does she know? What does Saikou Corp have to do with it? And, more importantly, what does Senpai have to do with it?"[6]

"Megami Saikou, the Student Council President, strives for excellence in all things. She settles for nothing less than the best, so has put together a student council comprised of the most elite students in school.

Megami has reason to believe that there is "a dangerous person" on school grounds, so she has warned the Student Council to be extremely cautious over the next 10 weeks, and has authorized them to carry pepper spray on school grounds. As a result of Megami's warning, the Student Council are much more alert than other students, and will bust out a can of pepper spray at the slightest sign that their lives may be in danger."

Megami is going to be a strict disciplinarian.[7] Everyone agrees that she is mature, responsible, and intelligent. Her IQ is 140.[8] However, some say that Megami acts as if everything she says and does has been written in a script and rehearsed.

While her father tolerates Ayano's presence at the school, Megami herself does not and openly confronts her. It is unknown why she is acting this bold. She would use her bare hands when apprehending Ayano, as opposed to pepper spray.[9]

Megami has a charismatic aura of confidence and maturity which sometimes results in adults feeling inferior to her, especially as she talks to adults as if they were her equal, rather than her senior.[10] Given her upbringing, Megami views crying as an activity that is only performed by failures; something not befitting of a member of the Saikou family.[11]

It is rumoured that Megami hates or is scared of men, due to her only accepting women into the Student Council, and that she has something to do with Aoi Ryugoku's missing eye.[12]

If Ayano is alone and gets close enough to the laptop in the Student Council room, Megami will begin speaking. It will shut off after she finishes her monologue, and will not turn on ever again, unless the game is restarted.

YandereDev has said that Megami's routine will put her in close proximity to Senpai or other students.[13] During her week, the Student Council will be holding a presidential election, and Megami will be running for re-election against some unknown candidates.

Megami is the heiress to the large business conglomerate Saikou Corp. Most of her life was spent inside of Saikou Corp headquarters, which is also where her family lives.

Megami's childhood was cold, sterile, clinical. Her "CEO training" began around the same time as her formal education. Training and education were the two focuses of every day. She didn't get to spend much time around other children and was influenced to believe that desiring playtime or feeling loneliness were weaknesses, so she voluntarily suppressed her own desire to play or have friends.[14]

Someone attempted to bully her, but Megami won the conflict. [15]

The rivals have been stated to each have a dark secret.[16]

The topics towards Megami Saikou are (Negative/Positive/Neutral) as follows:

YandereDev states that her younger brother, Kencho, is the only person who knows how to get under Megami's skin, push her buttons and make her lose her temper. He repeatedly tries to compete with Megami, though she clearly surpasses him.[17]

If she learns of Kencho's death, Megami would see the death as a "tremendous waste of time and money."[18]

YandereDev states that she is aware of her existence but her family never spoke of her.[19]

It is unknown if Megami likes Senpai or not, but it is mostly thought that she does, as she refers to him as "Senpai". Megami will try as hard as she can to keep Senpai safe from any harm.

If Senpai tries to commit suicide after his sister dies, she will run over and try to stop him.

Megami strongly cares about the Student Council members and would go so far as to 'violate her orders' if one of them was harmed. If the player kills one of the student council members, cameras and metal detectors will be set up around the school.

Megami would never tolerate a dysfunctional Student Council.[20] If Ayano framed one of them, Megami would strongly doubt that they were the killer.[21]

If someone were to openly explain their perverted fantasies involving the Student Council, she would show no reaction whatsoever.[22]

Since she knows Ayano's true nature and they are in the same year in the same school, Megami kept a close eye on Ayano.[23]

During her computer monologue, Megami is very hostile to Ayano and will refer to her as a "vulgar creature" and that she would "exterminate" Ayano if she could. This shows that she isn’t very fond of Ayano. YandereDev has stated that in the full game, Megami will not be hostile if the player doesn't make a bad call.[5] It is not yet known what a "bad call" refers to. It is unknown if Megami knows that Ayano is the dangerous person in school.

Megami thinks Kaga is unpredictable, but a potential cause of slight concern.[24]Kaga may very likely be Megami's suitor for her Matchmaking elimination.

Megami considers Kizana annoying as she constantly asks the student council for a higher budget than she needs.[25] She thinks she is obnoxious.[26]

An illustration of Megami.

A silhouette of Megami from "Yandere Simulator: Past, Present, and Future"

An old illustration of Megami.

An illustration of Megami by kjech.

An illustration of Megami by kjech.

An illustration of Megami from the the third anniversary blogpost.

A male version of Megami from the Yandere Simulator Male Rival Introduction Video.

Megami in The Student Council in Yandere Simulator (Gameplay Focus).

An illustration of Megami from the 5th Anniversary blog post

An illustration of Megami in the demo introduction video. 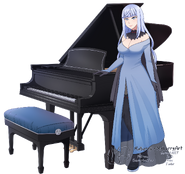 An Illustration[1] of Megami in a dress by MulberryArt[2].

Another Illustration of Megami in a dress by MulberryArt.

An illustration of Megami as a "Vampire Nun" by MulberryArt. 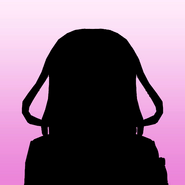 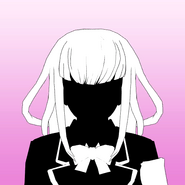 Megami as she appeared in-game in the December 18th, 2017 Build. 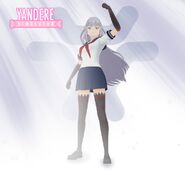 A reference image of Megami by Druelbozo. 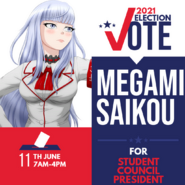 A poster of Megami for the Student Council elections found in the game files.