View source
watch 02:05
Wiki Targeted (Games)
Do you like this video?
Play Sound

Matchmaking is a non-lethal method used to eliminate a rival in Yandere Simulator.

On the Schemes menu, the description is, "This scheme will end with your rival falling in love with another student."

Each rival will have a crush other than Senpai, so the player will be able to matchmake every single rival with a male suitor.[1] When they have been eliminated peacefully, all normal NPC interactions become available for the rivals afterwards.[2] However, Mida Rana and Muja Kina will disappear from the game when their week ends even if they are eliminated non-lethally,[3] due to not currently having a reason to stay at the school for any longer.

To begin the matchmaking process, the player must find out what the rival likes to see in a guy, both in terms of appearance and personality. This can be done by eavesdropping on the rival's conversations.

After that, Ayano must then identify the suitor. This student will likely be someone who spends a lot of time near the rival. The player must then complete a task for the suitor to gain his trust. This unlocks a "Love" option in the interaction wheel, which in turn unlocks the matchmaking menu.

In order to make the suitor interact with the rival, Ayano needs to purchase a wireless headset and earpiece from the Drops menu for five panty shots, or from the electronics store in Buraza Town, to give advice to the suitor while he is interacting with the rival. Ayano then needs to befriend the rival and use the Court option to tell the rival that someone wants to meet her at the east fountain. Ayano also must tell the suitor that the rival is waiting for him at the fountain and that she will guide him using the wireless headset.

Once both the rival and the suitor are at the east fountain, Ayano has to hide behind a nearby tree and give the suitor advice while he talks to his crush. In the matchmaking interface, to increase the rival's affection, the suitor can either give a negative remark, a positive remark, a compliment, show off to the rival, or give the rival a gift. Each action can be performed only once per day. How many points a good action gives depends on a multiplier.

Ayano must find out more about the rival in order for the interaction to go smoothly. She can stalk the rival and listen to her conversations to learn her likes and dislikes, or simply buy them from Info-chan. This allows Ayano to advise the suitor on what negative or positive remarks to give when he is interacting with the rival. As of the June 15th, 2019 build, the player can also 'Cyberstalk' a rival at nighttime on the PC to instantly find out what her opinions are.

Ayano must 'train' the suitor to acquire non-physical traits that the rival finds attractive. If a rival is attracted to intelligence, then Ayano must study with the suitor, increasing his wisdom. He can then use what he learned to impress the rival.

Ayano can also buy something that would make a good gift and give it to the suitor; this allows the suitor to give the gift to the rival during the matchmaking interaction.

When complimenting the rival, the suitor must pick the correct type of compliment that displays common sense and suits the rival's personality. Certain rivals would prefer a romantic compliment to a vulgar one.

On Friday, the rival will have to choose whether to confess to Senpai or to her suitor. If the rival's affection for the suitor is at 100%, she will leave a love note at the suitor's locker instead of Senpai's locker, asking him to meet her at the Confession Tree. The suitor will see this note and rush off to see the rival. After this, a cutscene where the rival confesses her love to the suitor will play; they will kiss and start a relationship.

Osana and Kyuji meeting under the Confession Tree.

Kyuji confesses that he feels the same way.

On subsequent days after the rival confesses her love, she and her suitor can be seen acting like a couple: they hold each other's hand while walking to school and cuddle together on the rooftop during lunchtime.

As the rival begins to fall more and more for the suitor, her interactions with him will change slightly.

If her affection is at 0%, she will frown and have unimpressed, bored dialogue.

If her affection is at 50%, she will blush, smile and have flirtatious dialogue.

If her affection is at 100%, she will be completely infatuated.

Multipliers will cause a suitor to earn more affection with his crush. A 1x multiplier will give him 1 point per positive interaction and a 5x multiplier will give him 5 points per positive interaction. It isn't possible for the affection meter to be filled in five days without a 5x multiplier. The more physical traits that the suitor has that the rival likes, the higher the multiplier. An 11x multiplier can be achieved by a suitor having all the traits the rival finds attractive, wearing the pink panties that provide a matchmaking boost, and having Ayano's seduction level at max.

A suitor giving a gift to a rival is a way to increase the rival's affection. As of the August 31st 2020 Build/Official demo, the player can purchase gifts from the gift shop in town and give them to Kyuji Konagawa if they intend to eliminate Osana through matchmaking.

Where to find a rose. 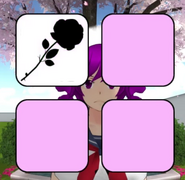 Giving a rose to the rival.

The rose was available before the release of the demo, but is no longer an option.

Where to find a cat accessories. 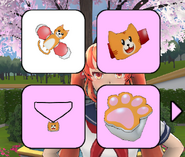 Giving the accessories to Osana. 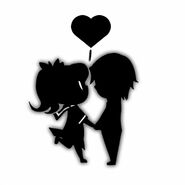 The second sprite art for Cupid, from "Yandere Simulator: Past, Present, and Future".

Ayano using Kokona and Riku as puppets during matchmaking.