The Martial Arts Club is one of the clubs in Akademi.

The Martial Arts Club room is located in the northern wing of the second floor. The room has dark green walls with a light green rim and tatami mats on the floor. In the middle of the room is a large grey-green mat, as well as two smaller mats at the front of the room. There are three lights on the ceiling. The walls are decorated with multiple scrolls of a snowy mountain. Wooden towers are located at the far left and right corners. A wooden doll is located at the far right corner. The windows at the back of the room are opaque, but the ones at the front are transparent. A changing room that Martial Arts Club members and Ayano can use to change into their gi is located between the two smaller mats. Four potted bamboo plants are located on both sides of the room and on each side of the changing room.

To join the club, Ayano will have to talk to Budo Masuta and select the "Join" option on the interaction wheel. Once joined, Ayano will wear a headband and is able to change into a gi. 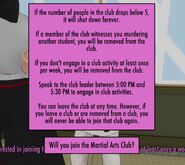 More information about the club. 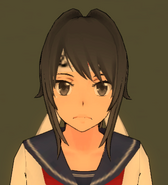 While Ayano is a member of this club, she will have a higher self-defense stat, making it easier to win a struggle against Heroes and teachers.

Every day, after and between classes, members of this club will enter the room, change into their gi, and spar. Budo Masuta typically watches two students spar at a time. Students that are not fighting kneel on the tiny mats. When it is time to return to class, the students will change back to their school uniforms before they leave the room. Another part of their routine is that they will also go to the Japanese Gardens to practice, as a part of their normal club routine.

If Ayano joins in club activities, they will all practice kicks on the mat. To avoid being kicked out, she must participate at least once a week.

Beating a member of the martial arts club. September 13th, 2018.

Ayano is able to spar with the members of the Martial Arts Club, even if she isn't a part of the club. The purpose of the martial arts mini-game is to help the player practice fighting off the delinquents whenever they are in combat with them. For this reason, the martial arts mini-game will look similar to the delinquent mini-game. Unlike the delinquent mini-game, however, Ayano won't be injured if she loses. Before the mini-game starts, Ayano has the option to pick which member she wishes to spar against. She can choose from the easiest member, Shima Shiya, to the hardest, Budo Masuta.

If at least one member of the martial arts club is dead or missing, it will not be possible to spar with anyone in the club

The Martial Arts Club has been disbanded.

Budo and the members talking if the club is disbanded.

Ayano will not be possible to get kicked out from this club if any Martial Arts Club members sees Ayano kills someone on the previous day, just like the Sports Club. Instead, any member of this club will try to apprehend her. However, she will be kicked out if the player does not participate in club activities at least once a week. If Budo dies, goes missing, or if there are less than five members in the club, the club will disband. Once the club closes, the door to the room will be locked and its members will not wear the headband anymore. The player can also request permission to leave, but once they leave, they can never join again.

The first appearance of the club room.

The second appearance of the club room. November 16th, 2015.

The third appearance of the club room. January 1st, 2016. 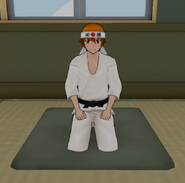 The Martial Arts Club practicing at one of the Japanese Gardens in-game.

The male Martial Arts Club members eating their lunch outside of the club in-game.

The female Martial Arts Club members eating their lunch outside of the club in-game. 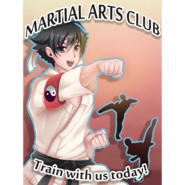 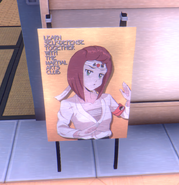