Ayano Aishi, also known as Yandere-chan, Yan-chan, or Ayano, is the main character of Yandere Simulator. Her job is to eliminate all rivals before the week's current rival can confess their feeling to Senpai.

If Ayano does not successfully eliminate the rival or manage to ruin five rival interactions with Senpai before Friday, said rival will confess her feelings to Senpai, and he will accept them. Ayano will become heartbroken and receive a Game Over. 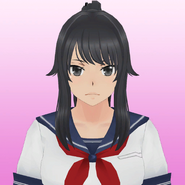 Taro Yamada, more commonly referred to as Senpai, is a main character of Yandere Simulator. He is Ayano's love interest and obsession. She can only confess her feelings to him after all ten rivals have been eliminated. However, her confession won't be accepted if her reputation is below -100, which will result in a Game Over.

If Ayano does not successfully eliminate the rival or manage to ruin five rival interactions with Senpai before Friday, said rival will confess her feelings to Senpai, and he will accept them. Ayano will become heartbroken and receive a Game Over. 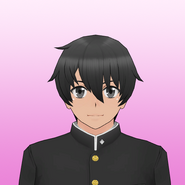 Info-chan is a main character in Yandere Simulator and Ayano's main source of assistance. Males and females alike give her money in exchange of panty shots of female students.

Info-chan can give Ayano all the information she has on an NPC if she is sent a picture of their face. If Ayano sends her panty shots, Info-chan can provide other services, such as Schemes and Drops. 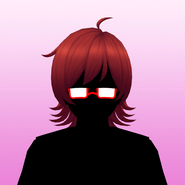 Ryoba Aishi is a main character in Yandere Simulator and Ayano's mother. She is also a yandere and the protagonist of 1980s Mode.[1] She will not appear in Story Mode for 10 weeks,[2] as she is hunting down The Journalist.[3] Please visit Basement Tapes to understand more of her backstory. 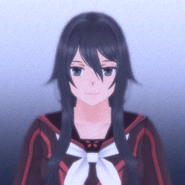 Jokichi Yudasei is a main character in Yandere Simulator and Ryoba's husband and Ayano's father. He is also Ryoba's senpai in 1980s Mode. He will not appear in Story Mode for 10 weeks[2] to assist his wife in chasing down The Journalist.[3] The Basement Tapes explain more of his backstory. 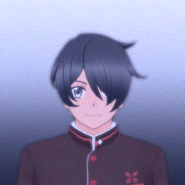 Every week during the 10 weeks in the game, a new female student will fall in love with Senpai and become Ayano's new rival. It is Ayano's goal to eliminate the rival before Friday of each current week. There will be one rival per week.[4]

Osana Najimi is currently in the demo. Amai Odayaka also makes an appearence in the demo on saturday and during the Amai Challenge. Kizana Sunobu could of been added by editing the json files, just like Osana used too, but was quickly removed due to the fact that she was only added for a video. Oka Ruto was in the game for a decent amount of time before getting pulled for the development of her as a rival. Muja Kina was in the game as the nurse before getting replaced by the official nurse, because Muja is only a substitute nurse. Megami Saikou can be seen on the laptop, and at the end of day sequence if a student council member is killed.

1980s Mode has 1 tutorial rival and 10 fully functional rivals who are all present in the demo.

Currently, the only rivals available to play with are Osana Najimi from Story Mode[5] and the 10 rivals from 1980s Mode. The rest for Story Mode will be in the full game when it comes out.