Kidnapping is a non-lethal method used to eliminate rivals in Yandere Simulator.

The necessary preparations include Rank 1 in Biology, a syringe, and the tranquilizer.

The description on the schemes menu is, "This scheme will end with your rival being kidnapped".

Note: If used incorrectly, such as using the syringe on a male student, you having no tranquilizer, or you having already kidnapped 2 students, it will only kill the student.

How to Kidnap a Student

Ayano must get to Rank 1 in Biology so that she knows how to properly attack with a syringe without accidentally killing the victim. Old-Fashioned Fundoshi Panties will make the process of leveling up her Biology stat easier.

Ayano must possess a syringe with a tranquilizer inside of it, both of which can be found in the school's infirmary. However, Nasu Kankoshi is always on guard and vigilant about keeping an eye on anyone in her office, and the items will not be easily obtainable. Currently, Ayano has to poison any student's bento with the headache poison and retrieve the tranquilizer while she is giving medicine to the student. Alternatively, Ayano can also get a sedative from Info-chan, which will work just like a tranquilizer.

Ayano must also be able to ask the target for a favor in order to get them to follow her. She can access this action by befriending the target beforehand by completing a task, having a high Reputation, or by having a high Seduction level.

She must also have a case to keep her victim inside, which can be found in the storage room on the right side of the gym. The box will be there from the start of the game, but in the future, one must get a Favor from Info-chan for it.[1]

If Ayano has all of these, she must ask the target to follow her, lead them to the storage room and close the door, after which Ayano can attack them with the syringe.

A "Kidnapping Checklist" will appear onscreen when entering the storage room, informing Ayano if she is currently meeting all of the criteria in order to perform a kidnapping. If Ayano doesn't meet all the criteria, she will kill the victim instead. The checklist makes sure that Ayano is possessing a tranquilizer, their biology stats are at level 1, the follower is female, a syringe is currently being held in the hand, and that the door is closed.

The target will scream when tranquilized and Ayano's sanity will decrease. Once they are tranquilized, Ayano must place the body into the musical instrument case. After the school day ends, Ayano will leave the school and come back during the night to pick up the victim, pretending to be a musician from a late-night show. After tying up her victim, Ayano will be so exhausted that she will go automatically to sleep and wake up the next day.

Note: If the police are called because of a murder, they will find the student and take them out of the case.

If Ayano tries to kidnap a female student and frame her, when the police arrive, they will find her sleeping in the case and assume that she hid from the police. She will then be arrested.

The next morning, Ayano can go down to her basement before going to school and the student will be there, secured to a chair. They will look at her wherever she goes. She is then able to torture the student or leave them. If a rival is betrayed, they will be tied up in the basement the next day. If Ayano tortures a rival enough and lets them go back to school, they will be sitting against a wall of the school, saying aloud some depressing thoughts. Ayano can also give them a weapon at this state and tell them to kill a person from their gallery. Since the kidnapped student is so traumatized, weak, and depressed, they lose control of themselves and their sanity. The student will then slowly walk towards the chosen victim with their head down and arms twitching, muttering "Kill, Kill, Kill..". If the insane student reaches the intended victim, they will tackle the other student and repeatedly stab them, until that student is dead. After their job is done, they will stab themselves in the neck, killing themselves as well.

The day after a kidnapping, the School Atmosphere will decrease by 5 points because a student went missing without explanation. If the student was a club leader, then the club will be closed because the members do not know what to do with their leader missing.

Previously, when Kokona was the test rival, there was another reason to kidnap someone. In order to befriend Kokona, Ayano had to kidnap Musume Ronshaku. Musume, in addition to being tied up, would also wear a white blindfold. The player could record Musume begging for help and the video would be sent to her father. Ayano would then transport Musume back to her father's business. Musume would be extremely traumatized after the kidnapping. 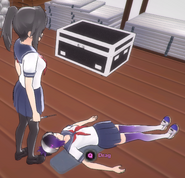 Kiba Kawaito being placed inside the case.

The tranquilizer on the desk.

Yui Rio being placed inside the case.

The tranquilizer on the desk.

Koharu Hinata being placed inside the case.

First sprite art for Kidnap from the Challenges page.