Kaga Kusha is a male student who attends Akademi High School. He is the president of the Science Club.

Kaga has messy, silver hair fading to blue like a stereotypical mad scientist. He also has light blue eyes with a blue eyepiece over his left eye.

Kaga wears a long, white lab coat with a slit in the back and gold rubber gloves over the default male uniform. He wears the "Red Armband of Leadership" with a picture of an Erlenmeyer flask on his left arm.

"The most intelligent - and eccentric - student at Akademi. Possesses a genius-level IQ, but is prone to extremely bizarre behavior, and frequently expresses thoughts that frighten and concern the people around him."

Among the personas currently implemented in the game, he is a Teacher's Pet. He will give Ayano a suspicious look if she aims her camera at him. If he sees a corpse or witnesses a murder, he will run to tell a teacher, unless another Teacher's Pet already has. He cannot participate in physical fights against murderers. Kaga's IQ is 170.[4]

"Kaga is the most intelligent - and most eccentric - student in Akademi High. He was reading by age 2, writing by age 4, could speak multiple languages by age 6, demonstrated a genius-level IQ by age 8, and passed multiple college-level proficiency tests before age 10. Despite his genius, he is not a well-liked figure at Akademi High; he is prone to extremely bizarre behavior and frequently expresses thoughts that frighten and concern the people around him.

He will openly speak of his aspirations for "world domination" to anyone that is willing to listen, although he refuses to divulge the specifics of his master plan. It is common knowledge that he has a deep obsession with Saikou Corporation, the most powerful business conglomerate in Japan. He has openly stated that he fully intends to become the CEO of Saikou Corp as soon as possible - but he never divulges how he intends to do so. Additionally, he also seems to be obsessed with the concept of constructing a giant robot.

He could have easily gotten into a top university, but instead chose to enroll in Akademi High School, stating that it is "the first step" towards his ultimate ambitions. Many students have observed him studying the school's Student Council President, Megami Saikou, in a way that borders on stalking. His behavior can only be tolerated by other individuals who are almost as eccentric as he is, and so his club has come to be populated almost entirely by Akademi High's most unusual students."[5]

At 7:00 AM, Kaga enters the school grounds. He walks to his locker at 7:05 AM and changes from his outdoor shoes to his indoor shoes. At 7:15 AM, he walks to the Science Club on the third floor and looks at a screen.

He walks back to class again at 1:30 PM and participates in cleaning time between 3:30 PM and 4:00 PM. Afterwards, he heads to the Science Club and stays there until the end of the day.

The topics towards Kaga are Negative/Positive/Neutral as follows:

An illustration of Kaga from the the third anniversary blogpost. 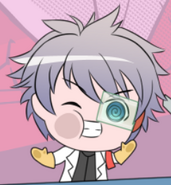 Concept art of Kaga by kjech. 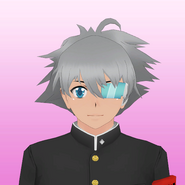 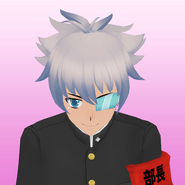 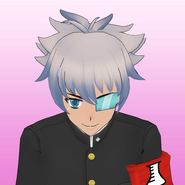 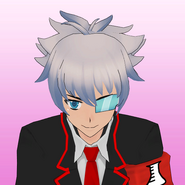 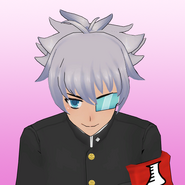 Retrieved from "https://yandere-simulator.fandom.com/wiki/Kaga_Kusha?oldid=499573"
Community content is available under CC-BY-SA unless otherwise noted.