View source
watch 02:53
GTA: The Criminal Enterprises - The Loop
Do you like this video?
Play Sound
This page is for the version of Hanako Yamada in 202X Mode. For her Mission Mode counterpart, see Nemesis.

Hanako Yamada is the ninth upcoming rival in Yandere Simulator.[3]

She is not present for eight weeks because she is in a different school, however she cannot stand not being in the same school as Senpai's. She then becomes a student at Akademi.

Hanako will wear the default school uniform unless customized by the player.

She will look like a gender-swapped version of Senpai, which means that if Senpai were to be customized, she would have the same skin and hair color as him. However, she will have a unique hairstyle that no other NPC will have[4]. At one point, it was made to look similar to Midori Gurin's original hairstyle,[5] except that she had more bangs on her face.[6]

Around November, her appearance was changed to her current design. She now has two pigtails that reach her shoulders with two strands of hair protruding, similar to the first drafts of her appearance. She has a red heart hairpin on the top right side of her hair and she has fair skin.[7]

It is also known that she will eventually wear special stockings to make herself stand out,[6] as well as unique panties[8] that suit her personality.[9]

"Hanako is Senpai's younger sister. She loves her big brother more than anything in the world and depends on him for almost everything. She is very possessive of him and becomes upset when he won't spend time with her.

After nine weeks of gameplay, Hanako decides that she just can't bear to be enrolled in a different school than her beloved brother, and transfers into his school so that she can be with him all day long.

Hanako is deathly afraid that if her brother gets a girlfriend, he'll forget all about her and refuse to spend time with her. She has made it her mission to stop him from getting a girlfriend at all costs so that nobody else can have her big brother's attention. Senpai would never want to do anything that would make his little sister cry... this would spell doom for anyone who has fallen in love with Senpai."[10]

On the official website, Hanako is described as 'Girly and Childish'. Because she couldn't stand being away from her brother, she decided to transfer to Akademi in order to be with her brother all the time. As described by YandereDev, Hanako is 'hopelessly dependent on Senpai, though she will eventually become independent if rejected or matchmade with another boy. Hanako can be sometimes described as a little bit overprotective.

Hanako's worst fear is that Senpai will get a girlfriend and forget all about her. Because of this, she had 'made it her mission' to stop any girls from loving Senpai and keep him all to herself. Senpai could never stand making his sister cry, and so she would be very dangerous to Ayano. The only person Hanako would be willing to give Senpai is Osana, as they are very close to each other.

His sister will remain in another city and school until the week when she is introduced.[11] Since she will always be close to Senpai, it is presumed that she will have a similar routine to him. In order to eliminate her, the player will have to find a way to eliminate her during the few moments she is away from Senpai.[12] If the player fails to eliminate Hanako by Friday, she will force Senpai to promise to not get a girlfriend by the Confession Tree.[13]

The topics towards Hanako are (Negative/Positive/Neutral) as follows:

Along with Osana, she and her brother used to play together when they were little.[14] She doesn't lust after her brother but loves him to the extent that she does not want him to get a girlfriend. She wants all his attention and does not want anyone to divert his attention from her.[15] She is also extremely clingy, possessive of him, and would never want to leave his side.[16] If she is killed, Senpai's sanity variable will greatly decrease.[17] At the end of the sister's week, she will force her brother to agree that he'll never get a girlfriend.[13]

If she convinces Senpai never to get a girlfriend, she will eventually develop into a self-reliant, independent person who won't rely on Senpai. [18]

If she ever got a boyfriend, she would become independent from Senpai, and he would be happy for her.[19]

Hanako and Osana have known each other since they were children and used to play with each other alongside Senpai when they were little.[14] Osana might be the only person that Hanako would be willing to "give" Senpai to. Hanako wouldn't really look at Osana as competition, or a threat, or an enemy. Hanako would be very sad if Osana died.[20]

In the future, Ayano Aishi will be able to matchmake Senpai's sister with her suitor. She will have to make her love the boy even more than she loves her own brother.[21]

An illustration of Hanako.

An old illustration of Hanako.

Another silhouette of her from How Sanity Affects Murder in Yandere Simulator.

Another old illustration of Hanako.[28] 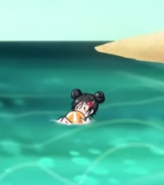 An illustration of Hanako by kjech.

An illustration of Hanako from the the third anniversary blogpost. 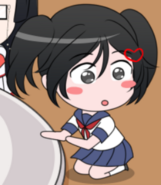 A male version of Hanako from the Yandere Simulator Male Rival Introduction Video.

An illustration of Hanako from the 5th Anniversary blog post 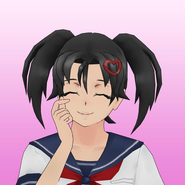 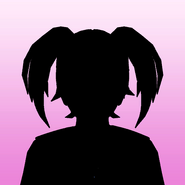 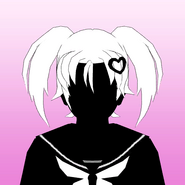 A reference image of Hanako by Druelbozo.

Hanako in the Thanks For Playing cutscene at the end of the demo. 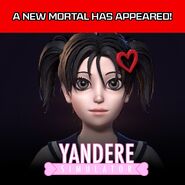