Genka Kunahito is the daughter of Mae Kunahito and the Guidance Counselor at Akademi High School. She is a faculty member in Yandere Simulator.

When Ayano Aishi misbehaves in front of a teacher or student council member, she is taken to the Counselor's Office.[3]

When first implemented, Genka wore a black dress with a very low neckline, revealing her cleavage, and her pantyhose underneath her skirt. Her hair was pulled back in a small bun. Her eyes, glasses, panties, and shoes were black. Genka also wore a red ribbon around her neck.

Genka's glasses are now red, her hair is dark brown, and her eyes are a light brownish-red.

There was another version of her appearance where Genka had red eyes, glasses, and shoes. Her dress also had red embellishment. However, the black version was the one picked through a poll.[4]

She is mostly professional, but she still has a bit of sex appeal.[5]

"Genka Kunahito is the guidance counselor at Ayano's school. In addition to helping students deal with personal problems, giving students advice on what colleges to apply for, and helping students decide what careers to pursue, she is also responsible for administering punishments to students who break school rules.

If a teacher catches the player breaking school rules, the player will be sent directly to the guidance counselor, where they will have to explain their actions or face harsh punishment. Genka is a strict disciplinarian, but she has been known to show mercy to students who can provide a reasonable explanation for their behavior.

The player can weasel out of punishment by deceiving Genka with a lie... but if the player is sent to the guidance counselor too often, Genka will stop believing the player's lies. Japanese schools do not have "detention"; Genka will punish the player by suspending them from school for a period of time that is directly proportional to the severity of their misbehavior.

The school's headmaster delegates most of his administrative duties to Genka, who practically functions as his secretary. Many students and faculty members feel like Genka contributes more to the school than the headmaster does. Genka is widely expected her to become the school's new headmistress once the current headmaster retires.

Genka's mother also served as the school's guidance counselor for 30 years, beginning in the 80s."[6]

Genka does not have an authoritarian personality like normal teachers. Instead, she has a "genuinely wants to help" persona. Her patience has a limit, though, and there will be a point at which she will stop forgiving Ayano.[7]

The topics that Genka feels Negative/Positive/Neutral towards are as follows:

Genka sits in her chair working on her Saikou computer every day. She will eventually have a routine, but it is not a high priority at the moment.[8]

Genka indirectly influenced the forming of the delinquents when she dismissed reports of bullying due to lack of evidence. As such, she feels responsible for their well-being and has been given ten weeks to reform them back to their old ways, or else they will be expelled and Genka will be dismissed from the school by Kocho Shuyona. She plans to suspend Osoro Shidesu so that she can reform them.[9]

Ayano can report another student's misconduct in order to eliminate a rival. Currently, the player can report a student for taking panty shots, stealing, smoking cigarettes, vandalizing school property, or cheating on a test. Five infractions over the course of a week will result in the rival's expulsion.

Being Sent to the Office

If a teacher or student council member catches Ayano misbehaving, she will immediately be sent to Genka's office. Her sanity is restored upon arriving.[3]

If Ayano attempts to attack a teacher or student council member, drag a body, kill a student, etc., she will be apprehended instead.

While in her office, Ayano may choose how to react to the accusations made against her:

The types of punishments she will give Ayano for failing to explain her behavior are different depending on how many times she has been sent to her office, along with the option that was chosen.

Depending on what day the suspension occurs and how long it is, the player may receive an automatic Game Over. For example, if Ayano is suspended for four days on Thursday and she has not eliminated her rival, she will be unable to stop the rival from confessing to Senpai.

A full body illustration of Genka.

An illustration of Genka eating with some of the other faculty members by kjech. 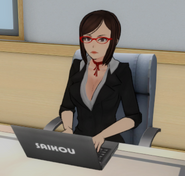 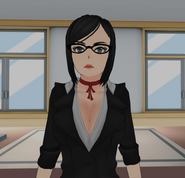 Genka looking at her computer screen.

Community content is available under CC-BY-SA unless otherwise noted.
Advertisement