A Game Over is when the player is successfully stopped from ever being with Senpai. There are various types of Game Overs which occur under different circumstances, such as "Heartbroken", "Arrested", "Expelled", "Exposed", "Apprehended", "Senpai Lost", "Comatose", "Caught", and "??????????". The full list of Game Overs can be found below.

When a rival successfully confesses to Senpai on Friday under the Confession Tree, he will be so moved by her love confession that he will happily accept. And Ayano will get a game over if she fail to sabotage rival's conversation with Senpai.

Alternatively, at the end of the ninth week, Senpai's younger sister will force her brother to promise to never get a girlfriend.[1]

In the future, if Ayano's reputation drops below -100, Senpai will reject her love confession, resulting in a Game Over. If she goes to class with a reputation below -100, then she will receive a short cutscene of students laughing at her, followed by an instant Game Over.

When a Heroic student, a Protective student (namely Raibaru Fumetsu), a delinquent, Fureddo Jonzu (above 80% school atmosphere), or a teacher witnesses Ayano committing murder or dragging a corpse, they will attempt to apprehend her immediately.

If a student grabs Ayano, a struggle mini-game will begin. To get out of it, the player must press the Q, E, R, or F keys in a semi-rapid session to get the icon all the way to the right side of the bar. Should the player fail, if the icon reaches the left side of the bar, the student will pin Ayano to the ground with Ayano groaning, "Ugh! No!" and result in an "Apprehended" Game Over.

If a delinquent sees Ayano committing murder or dragging a corpse (unless it was one of the bullies, in which case they do nothing), they will enter a combat mini-game and will refuse to stop fighting until they have knocked her into a coma or until she kills them.

If Ayano kills a student around four and above other students, she will be overwhelmed and apprehended.

If Ayano kills a student in front of Raibaru, she will attempt to apprehend her immediately. If Raibaru grabs Ayano, no struggle mini-game will initiate regardless of how high the player's self-defense stat is, and Raibaru will break one of Ayano's arms before apprehending her. The same thing happens if the player attempts to attack Raibaru from behind. This is because Raibaru has been intended to be invincible.

The "Expelled" Game Over is linked to those with the Strict and Dangerous persona.

The information below is about the various circumstances in which the player can successfully instigate an "Expelled" Game Over in Yandere Simulator.

As of the October 14th 2018 build, any disruptive behavior except committing or being linked to murder will cause Ayano to be taken to the Counselor's Office.[2]

If Ayano hasn't cleaned up a murder scene and the police are called, she will get arrested for murder. To prevent this, Ayano must:

However, if Ayano disposes crucial evidence (bloody uniform, gloves, weapons) and has her composure, but still leaves the corpses and/or blood around, then she won't get caught, because the police can't trace the murder to Ayano. School atmosphere drops like usual.

If Ayano rigs a drinking fountain to electrocute someone and then walks into the trap, she will be zapped, causing her to fall into a coma. Before the April 26th, 2018 build, if Ayano attacked a delinquent, held a weapon near them for too long, killed a student in front of them, or dragged a body in front of them, they would hit her across the head with their weapon, also causing this Game Over.

If Ayano threatens Kocho Shuyona, he will use his taser on her and she will fall unconscious.

This game over will only occur when the player got caught by any family members of Osana's Stalker. However, getting caught by the stalker himself will not result in a Game Over.

If 50 students are killed, the headmaster will close down the school for the safety of the remaining students. He would never do it normally, but in extreme cases like this, he has to. Senpai will transfer to a different school far away, which will result in Ayano permanently losing her chance to be with him, causing a Game Over. [3][4] This may happen if a large number of teachers die as well.[5]

In the future, if Ayano is part of the delinquents' gang and is sent to the Counselor's Office, Ayano may get an automatic Game Over.[6]

If Ayano gets a Game Over in this mode, she will fail her mission and the player will be required to start over again. There are many unique Game Overs in Mission Mode.

If Ayano fails any of her mission objectives, such as killing a student who is not the target, she will fail the mission and receive a Game Over.

Nemesis will continuously stalk Ayano and if she catches Ayano, she'll kill her, resulting in a Game Over.

If Ayano acts suspiciously in front of a security camera or holds a weapon while passing through a metal detector, she'll receive a Game Over.

The awareness meter works similar to the reputation meter. If Ayano is caught doing too many suspicious things, her awareness meter will reach 100 and she'll receive a Game Over for blowing her cover.

Yanvania: Senpai of the Night

The player character of this game, Beldere-chan, can take damage. If her health reaches zero, she will die and the Game Over screen will pop up, asking if the player would like to continue or not. Choosing "Aye" will restart the level, choosing "Nay" will take the player back to the main menu.

If Sakura chooses any incorrect choices through the game, the game will immediately end and the player will be taken to the title screen.

Choosing the wrong choices while on the date with the Flame Demon will cause him to get annoyed and take Sakura's soul.

The player can take damage from Oka's attacks. If the player's health reaches zero, they will die and the Game Over screen will appear, asking if the player would like to continue or not. Pressing "Z" will restart the game; pressing the "ESC" button will exit the game.

If the player runs out of time or gets caught by one of the Midoris, they will be surrounded by Midoris and get a Game Over. 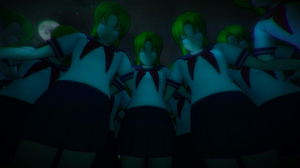 Retrieved from "https://yandere-simulator.fandom.com/wiki/Game_Over?oldid=490679"
Community content is available under CC-BY-SA unless otherwise noted.