Framing is an underhanded method that can be used to eliminate rivals or students in Yandere Simulator, and by extension, to restore School Atmosphere.

NOTE: There may be more ways to frame a rival in the future.

If a corpse is discovered on school grounds and the police find a murder weapon with a student's fingerprints on it, that student will be arrested for the murder. Ayano can wear gloves or a rain coat to take a weapon with another student's fingerprints on it, use it to commit murder, then leave the weapon and dispose of the other evidence. School Atmosphere will then return to 100% afterwards, since students believe that the killer was caught.

Currently, every student can be framed for murder using the following method (except the Student Council and the delinquents). To start, Ayano must head to the Art Club to grab some masking tape and the box cutter. If Ayano wears gloves, she can take the box cutter without leaving her own fingerprints on the weapon. Afterwards, she must take a cardboard box from the incinerator, seal it with the tape and place the box cutter in it. The box cutter cannot be inserted if it is already bloody, as students would notice and refuse to help. Finally, she must pick up the box and ask any student to help her take out the box cutter (claiming that the box cutter got stuck in the box while she was trying to cut it open), and they will agree to take the box cutter out and leave their fingerprints on it. The Student Council and delinquents will not help Ayano as they consider the request is too suspicious (which is the reason that they cannot be framed with this method), and Ayano cannot request help if she is bloody. If Ayano then commits murder with the box cutter (or commits it before, provided she washes off the blood and fingerprints before asking the student for help), the police will find the target's fingerprints on it and they will be framed and arrested.

If Ayano leaves an unsuspicious weapon (that is not bloody) lying around, such as the box cutter or screwdriver, and a student finds it, they will pick it up and put it back where it belongs. If the weapon is suspicious (and not bloody as well) a teacher will be notified and they will leave it in a box in the faculty room. Ayano can then retake the weapon while wearing gloves or a rain coat and commit murder. Note that students won't touch the weapon if it is covered in blood; instead, they will leave to report it to a teacher and the teacher might call the police, which could activate the police timer.

The description on the scheme menu is, "This scheme will eliminate with your rival being framed for murder."

Ayano not being arrested.

In a future build, the player will be able to frame a person for murder when she drenches them in blood. The victim will leave their bloody uniform in her locker, so if the police investigate the lockers, they will assume that the victim committed the crime and arrest them.[1]

Ayano can frame a mind-broken student for murder. Any mind-broken girl will kill the student of the player's choosing, and will then kill themselves right after the murder. If the mind-broken girl is interrupted somehow with the day ending before she can kill herself (such as committing it near the end of the day or the police showing up first or ending the day with a debug command), she will be the one arrested because she still killed a student, has her fingerprints on her weapon, and is alive. If the event is not interrupted, the police will conclude that it was a murder-suicide.

Mindslaves will now commit suicide when they are not used by the end of the day; therefore, this method doesn't always work.

In 1980s Mode, it is possible to obtain illegal narcotics from the Yakuza for $1,000, or for free if it is Ryoba's first time dealing with him. If Ryoba plants narcotics in a rival's bag, she can report it to Mae in a process similar to expulsion. The rival will be instantly expelled, and Mae will call the police, who will arrest the rival for possession of illegal narcotics.

There are several factors that will affect the outcome of the police investigation, such as:

If the player tries to frame a female student while kidnapping her, the police will find her sleeping inside the storage room used for kidnapping. They will assume that she hid from the police and will arrest her.

Framing + Dead Target: When the police arrive, they will note that the framed student and the other victim are dead and thus cannot perform an arrest. They will decide that a murder-suicide took place and will leave.

Framing + Insanity: If a student is framed but Ayano is visibly insane, they will both be arrested.

Framing the Dead Target: The police will notice the corpse, blood and fingerprints of the target on the same weapon that killed them, but there is no other incriminating evidence towards Ayano or any other student. The police are not able to solve the mystery (as it is unclear whether the target's death is a murder or suicide) and no one will be arrested.

Framing while Bloody: If the player frames a student but forgets to remove their bloody clothing, the police will note that the blood on Ayano's clothing is not hers. She is able to convince the police that she was splashed with blood while witnessing a murder.

However, if the player frames a student but then kills them, and forgets to remove their bloody clothing, the police will note that the blood on Ayano's clothing is not hers. This time she will be unable to convince the police she did not commit murder.

Sprite art for Framing on the Challenges page. 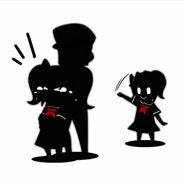 Secondary sprite art for Framing, from "Yandere Simulator: Past, Present, and Future".