Kokona Haruka being pushed off the rooftop. February 17th, 2016.

Fake suicide is a method that can be used to eliminate a rival.

There are two ways to fake a suicide:

The description on the scheme menu is: "This scheme will end with your rival falling to their death."

Main Article: Notes
In order to get the rival to go up to the rooftop, the player must lure her there with a note. If you have a picture of the student's face, you can find their locker by checking the list near the locker area. Every note asks the recipient to meet at a certain place and time to discuss something. These notes won't interest the current rival unless Ayano mentions their dark secret. Every rival's dark secret can be unlocked two ways: stalk the rival to eavesdrop on their conversations, or buy the secret from Info-chan for 10 Info Points. After the note is written, the player must find the student and talk to them, then use the "Send to Locker" option to inform them about the note.

Depending on what is put in the letter, there will either be a positive or negative response from the student who reads it. The recipient will either follow the directions to the rooftop or ignore the anonymous letter. In the letter, there will be a variety of options for the subject of the meeting, the time, and the place. Should the player ask for a meeting time that conflicts with a scheduled event such as a club activity, the rival will head to the rooftop as soon as she returns to her locker and reads the note. 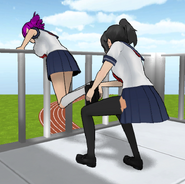 Once Ayano has led the student to the rooftop, she will have a twenty-minute opportunity to sneak up on the victim and shove them off the rooftop to make it seem like the person committed suicide. After the victim has been pushed off, a fake suicide note can be left by the victim's shoes on the rooftop if the player has allocated enough study points in the Language skill. If no note was left, it will be treated as a murder case by the police, unless they don't see a corpse.

If the player does not want to push a rival off, she can talk to her about her problems in order to befriend her. In either scenario, it is a win-win case for Ayano.

A teacher finding the shoes but no corpse.

The police found the dead body that fell to death from the rooftop and find a suicide note.

The police are unable to find the corpse if a student that fell to death from the rooftop been disposed. August 1st, 2020.

If the player doesn't want to drag the body to the incinerator and risk anyone catching them, there is an easier option to destroy the body. The player can push or pull dumpsters down below so when she pushes the person off the rooftop, they will fall into the dumpster instead.

She must push the dumpster into the correct place and have it open before killing someone, or else the victim won't fall into it. They will land on the ground. To indicate whether the dumpster is correctly aligned, an image of a pink exclamation-mark in a triangle appears. When pushed, the victim will fall into the dumpster. It will count as a hidden body, so the player can attend class, but it will be found by the end of the day. To hide the body, the player needs to pick up a garbage bag and place it inside the dumpster. The dumpster will fill up with trash and the body will be successfully disposed of, instead of being discovered. In future builds, there may be more bags needed to hide a body.[1]

The victim's shoes will be left on the roof, but as there is no visible corpse, the shoes will not arouse much suspicion. In fact, as long as the corpse is disposed of, the police will not intervene.

Another way to fake a suicide is to frame the rival for her own murder. The player must manipulate the rival into getting her fingerprints on a weapon, such as the box cutter, then kill the rival with said weapon while wearing gloves. If done correctly, the police will believe that the death is a suicide.

WIP of fake suicide, shown in the video "May 1st Build Delayed".

The original sprite art for Push in the Challenges menu. January 3rd, 2016. 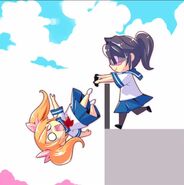 From the video "Yandere Simulator: Past, Present, and Future".