Ebola Mode is an Easter Egg Mode in Yandere Simulator.

Press E to activate this mode. When pressed, Ayano Aishi will become Ebola-chan. She will become deathly pale with golden eyes. Her hair is styled in waist-length pink pigtails, with a white flower in it. The tips of her pigtails have a curl that looks similar to the Ebola virus and glow red. Ayano will also have small light-purple bat wings and her uniform will be recolored to resemble a nurse's outfit. When idle, her arms will be splayed happily outwards in the “Girly” pose.

If you press V 10 times, you will change to Corona-Chan, a skin of Ebola mode that has the same effect and idle animation, but a different appearance. She has black hair with two corona-virus cells on top of it. She also has a red dress, which exposes her bust.

Any NPC with a complete AI she touches will instantly die (presumably from Ebola) and will exude a visible white vapor that resembles a skull. Teachers can be killed in this mode if they touch Ebola-chan. 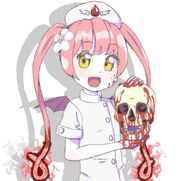 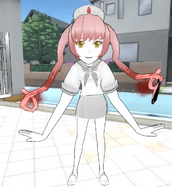 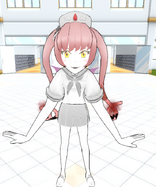 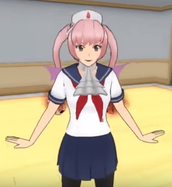 The player's broken texture when taking off uniform.

Retrieved from "https://yandere-simulator.fandom.com/wiki/Ebola_Mode?oldid=500556"
Community content is available under CC-BY-SA unless otherwise noted.