Easter Eggs are fun surprises in Yandere Simulator that the player must discover in order to use.

YandereDev has included many Easter Eggs in the debug builds of the game. They include wearable accessories for Ayano Aishi, game modes, a small timed event at the starting menu, references to several anime characters or in-game jokes, and a phantom. The final game may have cheat codes that change the appearance of the characters, like the Easter Eggs do.[1]

Other than Easter Eggs present throughout the game, there is also an "Easter Egg Menu" that includes many modes that change Ayano into characters from other media, or change the functionality of game mechanics. While these are not classed as proper Easter Eggs given that they can be easily accessed from the menu, this is the name given to them regardless. Normally, only one mode can be activated at a time, and they activate "Easter Egg logic" (which prevents Faculty and Police Game Overs, in addition to preventing further use of the menu), though those that do not activate Easter Egg logic do not disable the menu, thus allowing the player to use them in conjunction with other Easter Eggs. As of the March 1st, 2020 Build, it is also possible to simultaneously activate different modes by mashing the Easter Egg Menu button 10 times to open it (although it may cause unintended behavior as Easter Eggs were not designed to be used together).

Pressing the ? key will bring up the "Easter Egg Menu". The menu shows the following options:

If you press V ten times Ebola-Chan will have a new skin called Corona-Chan. Her hair resembles the Corona-Virus as she has a bigger version of it on her head. She has the same effect as Ebola Mode as she is a skin

If Ayano takes a picture in the bathroom on the third floor, a semi-transparent girl about the size of an average student model will appear in the picture. No matter where Ayano is, the ghost will be looking in her direction.

As of the February 21st, 2016 Build, a ritual knife has been added to the altar in the Occult Club room. Killing a student with it and then putting it back in the altar will transport Ayano to a dark void, where five figures stand in a circle. The player can converse with each of them.

The player can also press F1, F2, F3, F4, or F5 to change the students' uniform on the main menu screen.

In an older version, the starting screen had different animations every ten seconds, such as Ayano stabbing a student rapidly, being covered in blood while carrying a severed head, and staring blankly at the viewer. The only sound played during these scenes was static.

As of the November 1st, 2015 build, pressing the Y key on the opening screen will start Yanvania: Senpai of the Night as if the player had gone to Ayano's room at night to play it. When she finishes the game, it will end with the afterlogue and the disk error as normal, and the player will be in Ayano's room in the morning in pajamas instead of her uniform. 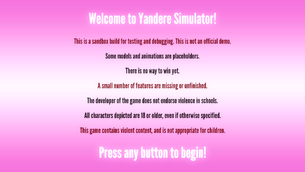 Ryuto is based on Ryuta Ippongi from Osu! Tatakae! Ouendan, Pippi is from a fangame of Ouendan called Osu!, Midori is based on Churuya from Haruhi Suzumiya' and fans who email YandereDev constantly, and Mai Waifu is based on YandereDev's dream anime girl.

The Photography Club members are a reference to the ‘Mystery Gang’ from the Scooby-Doo franchise. Fureddo is a reference to Fred, Rojasu is Shaggy, Sukubi is Scooby-Doo, Dafuni is Daphne, and Beruma is Velma.

Kuu Dere is based on Rei Ayanami from Neon Genesis Evangelion.[9]

There is an Easter Egg in Yanvania: Senpai of the Night. If the player presses M on the title screen, Midori Gurin will pop out from the right side of the screen and the afterlogue will start in her voice. The disk error will occur after she is finished.

The following Easter Eggs can be found inside the northeastern storage room on the first floor.

On a shelf at the right side of the room, lays white long bunny ears. This is a reference to Simply April. When picked up, Ayano will wear it until the day ends or is restarted.

There is a cardboard box inside the room that Ayano can "hide" in. This is a reference to the cardboard box stealth mechanic in the Metal Gear series. The player can remove it by pressing the Left CTRL key.

On a shelf at the right side of the room, there is a carrot, a reference to Veggie Gamer`s channel logo. When picked up, Ayano will hold it in her mouth until the day ends or is restarted.

There is a piece of cheese near a mouse hole at the bottom of the room. When examining the piece of cheese, words will come up on the HUD, saying, "Knowing the mouse might one day leave its hole and get the cheese...It fills you with determination." This is a direct reference to a line from Undertale.

There is a miniature Cheongsam/Qipao on the shelf to the left side of the room, between the Poem and the Golden C. It is a body-hugging traditional Chinese dress (usually red), very popular in China and the Asian countries. It is of Manchu origin. Also called Mandarin Gown during the 1920s-1930s in Western Countries.

When combined with Ebola Mode, the bat wings turn black and you'll also have access to a hairstyle in reference to Corona-chan since the dress was first implemented as a Corona themed reskin for Ebola Mode, but YandereDev decided to put it as a separate easter egg. "I really like the red china dress, and I want it to be accessible without activating an easter egg that is associated with death/disease" - YandereDev's response in the April 10th, 2020 build..

There is a golden C on one of the shelves, which is a reference to Crush Crush. When interacted with, Ayano's model will change to that of several of the girls from Crush Crush.

NGB Bear can be activated with the A key. This is a reference to Keylina NbG. When activated, it will follow Ayano around until the end of the day, or when A key is pressed again.

NyanDroid can be activated with the A key. This is a reference to TheNyanCave. When activated, it will follow Ayano around until the end of the day, or when A key is pressed again.

On a shelf at the right side of the room, there is a fake pink mustache. This is a reference to Markiplier. When picked up, Ayano will wear it until the day ends or is restarted.

On a shelf at the right side of the room, there is a lime green puppet with a leaf sprout who resembles Scrub-chan, Bijuu Mike's mascot. When picked up, it will be placed on Ayano's left shoulder until the day ends or is restarted.

On a shelf at the right side of the room, there is a pair of sunglasses with the word "THAT" on the right lens and "DUDE" on the left lens. This is a reference to Jay from the Kubz Scouts. When picked up, Ayano will wear it until the day ends or is restarted.

If Ayano goes behind the tree on the left when entering the school, they will have the option to summon the Ancient Evil, called "Void Goddess", which can be used to activate or deactivate (or toggle) students and teachers, or to teleport people to your location.

At various times each day, Kuu Dere, Senpai, and Horuda Puresu will walk to their respective places and read a book. Study-kun B used to read the same book in the library. This book contains simple information on Yandere Simulator's premise.

The last paragraph is a reference to the Undertale game file, "abc_123_a.ogg", in which listeners are asked not to spoil the game for others.

If Ayano steals Sakyu Basu's ring at lunchtime and then goes to the Confession Tree behind the school, a female voice will say "...that...ring...".

Between the April 15th, 2017 and April 26, 2018 builds, if the player pressed the Space Bar ten times in front of the placeholder delinquents, they donned Team Skull masks and danced slowly.

The Fun.txt was added into the Streaming Assets folder as of the February 8th, 2016 Build. Within the text was a single zero, which the player could change. Depending on the number entered, there would be several texts before the game usually crashes. Deleting this file does not have any effect on the game and it will run as normal. The file was removed in the January 4th, 2017 build, and readded in the April 2nd, 2018 Build.

The left eye of the skull in the Occult Club will glow blue after viewing the cheese. This is another reference to Undertale, namely the character Sans, whose left eye also glows blue.

If the player types out the word 'rainey' on their keyboard, a female student will appear in the Martial Arts Club just behind where Budo Masuta stands. She will wear the default uniform regardless of customization and has a long brown braid. She will slowly sway side to side.

If Ayano goes to Tatoro in the Light Music Club and asks him to forgive their sins 10 times, Tatoko (a pink turtle wearing a bow) will appear alongside Tatoro in his tank. She serves for cosmetic purposes only.

If the player types "thatdude" (the nickname of Jay from the Kubz Scouts, as mentioned above) on their keyboard, Nasu Kankoshi's model will change to have a shorter skirt and a larger bust and posterior. This easter egg was added in the April 27th, 2019 Build due to Jay expressing his disdain over the Muja Kina placeholder model (which similarly had large buttocks) being replaced with Nasu's model.

If the Konami code is entered on the characters page, the website's theme will become dark. All the current characters' profiles will be replaced by a profile of the Fun Girl. Her role, status, personality, appearance, and weakness will all be "?????". If the player hovers over her image, the page will start to turn to static and eventually the screen will go black. The Japanese text on the left says: