Drowning is a lethal way to eliminate rivals in Yandere Simulator without bloodshed.

On the Schemes menu, the description is: "This scheme will end with your rival being drowned."

How to Drown a Student

The player can drown any student that eats lunch by lacing it with an emetic poison. Currently, every student eats lunch except the bullies and the Student Council. Faculty members do not eat either.

When able to drown a student, a button will appear on the HUD that says "Drown". When pressed, Ayano Aishi will grab the student by the head and hold them under the water until they stop struggling. After letting go, the corpse will fall to the ground. Any student within the observable area will scream in horror and then act upon their persona. If Ayano does not dispose of the corpse, the police will be called. They will note that the student was drowned, but will be unable to find the perpetrator if there are less than 5 witnesses and there are no other murders that point towards Ayano as the perpetrator.

In order to drown a student in the bathroom, Ayano must first obtain emetic poison. It can be bought from Info-chan for 25 panty shots. Next, they must wait until lunchtime and for the student to start eating their lunch. Ayano must then distract the target by laughing or with the radio, which causes them to put down their lunch and investigate. While they are distracted, she must put the emetic poison in their lunch. Being noticed by other students will cause Ayano's reputation to drop, and being noticed by the target will make them disgusted and refuse to eat their lunch, removing the chance to drown them. If Ayano successfully poisons the food unnoticed by the target, they will eat it and feel sick, causing them to go to the nearest bathroom to vomit in the toilet, where she can drown them.

Alternatively, students who clean toilet bowls at Cleaning Time can also be drowned while they are cleaning a toilet. However, this is much more risky as other students will also come to clean the toilets and may witness the corpse. This is especially difficult in the third floor girls' bathroom, as the bullies will go there and gossip during Cleaning Time. So Ayano must close the stall door to prevent other students from discovering the corpse.

Ayano can also drown students in the fountain in the plaza by writing them a note to meet them there. She will then have a twenty-minute period to drown her target. The only students who go to the fountain without being lured are Senpai, Osana, and Raibaru as part of their cleaning time routine.

One of Osana Najimi's unique elimination methods involves the pool. This unique elimination method classifies as drowning. Osana will fall asleep sunbathing by the pool during lunch time on Thursday with Raibaru Fumetsu and the Bullies. In order to eliminate Osana, Ayano needs to befriend Gema Taku. After befriening Gema, the bullies will watch Gema play video games from outside the gaming club instead of sunbathing, which will get rid of witnesses. She will also need to get rid of Raibaru Fumetsu. After that, Ayano needs to take the weight from the gymnasium and tie it around her hair. Ayano will then shove the weight into the pool, drowning Osana under the water. Osana sunbathing and the way to eliminate her will be foreshadowed before it happens. 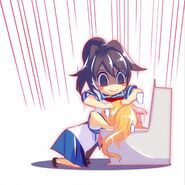 Second sprite art for Flush, shown in the video, "Yandere Simulator: Past, Present, and Future". 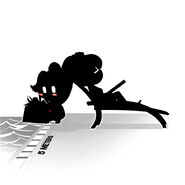 Sprite art for Osana Najimi's unique elimination method involving drowning in the pool. Seen in the blog post May Preview #11.